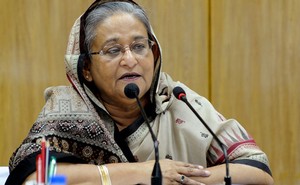 Prime Minister Seikh Hasina has ordered the authorities to take quick and proper action against those who were involved with unrest in the educational institutions ignoring their political affiliations.
She gave the instructions in a video conference on Monday with Sylhet divisional commissioner and police commissioner after the Cabinet meeting.
She said, “Take immediate action against those who are conducting violent activities in the educational institutions, including the universities. The government will not tolerate any terrorism in the campuses, no matter what the responsibility belongs to the ruling party's organs.”
Later, she also talked to the District Coordination Committee of Pabna and Mulovi Bazar through video conference.
Referring to the recent incidents in Rajshahi and Sylhet universities, she ordered the authorities to take immediate legal action without showing any political consideration.
‘We want you to take proper steps in this matter,’ the PM said.
The Prime Minister’s order followed the death of an outsider belonging to her party’s student wing Bangladesh Chhatra League in factional clash at Shahjalal University on Thursday.
Immediate after the killing on the campus, the authorities closed the university for sine die.
At the same time she also expressed her satisfaction over the arrest of those involved in the killing of RU teacher Shafiul Islam.