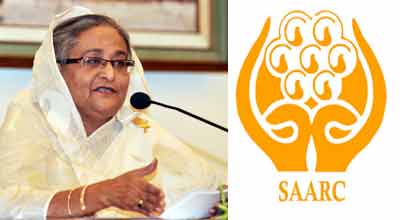 Prime Minister Sheikh Hasina is set to Dhaka on Tuesday afternoon for Kathmandu to attend the 18th South Asian Association for Regional Cooperation (SAARC) Summit.
Upholding the theme-- "Deeper integration for peace and prosperity", the two-day SAARC Summit will begin at the City Hall (Rashtriya Sabha Griha), Bhrikuti Mandap in Kathmandu on November 26.
Quoting Foreign Ministry sources, BSS reports that a VVIP flight of Biman Bangladesh Airlines carrying the Prime Minister and members of her entourage is scheduled to depart Hazrat Shahjalal International Airport at 3 pm on Tuesday.
The flight is expected to land at Tribhuban International Airport in Kathmandu at 4.15 pm (Nepal time).
Later, the Prime Minister will be taken to Hotel Crown Plaza Kathmandu-Soaltee through a ceremonial motorcade where she will be staying during her visit to Nepal.
On November 26, the Bangladesh Prime Minister will attend and address the inaugural session of the 18th SAARC Summit along with other heads of state or government of the SAARC nations.
On the sidelines of the first-day summit, Sheikh Hasina is expected to hold meetings with Nepalese Prime Minister Sushil Koirala, Afghan President Dr Ashraf Ghani Ahmadzai and Maldivian President Abdulla Yameen Abdul Gayoom.
The Prime Minister is scheduled to return home at 12.05 pm on November 28.