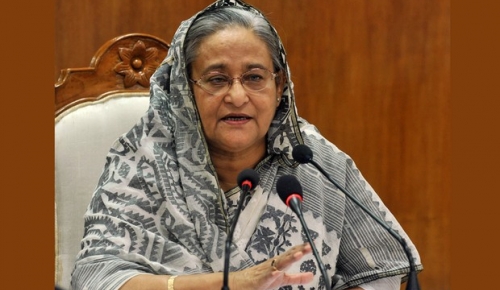 Prime Minister Sheikh Hasina has got “South-South Cooperation Visionary Award” of the United Nations for her extraordinary role in advancing Bangladesh towards digital system and the expansion of education through revolutionary concepts.

The award was given on the concluding day of the five-day “Global South South Development Expo-2014” held in the US capital of Washington on Friday, according to a message received here today.
Adviser to the Prime Minister on Information and Communication Technology Sajeeb Wazed Joy received the award on behalf of Prime Minister and his mother Sheikh Hasina.
A Special Envoy of the UN Secretary General, Ei Ping Jhu, handed over the award to Joy.
In his instant reaction to reporters after receiving the award, Joy said: “Bangladesh is moving forward under the leadership of Sheikh Hasina administration, the award is recognition of it.”
Highlighting the contribution of his maternal grandfather Bangabandhu Sheikh Mujibur Rahman to Bangladesh’s independence, he said the whole nation being united under the prudent leadership of Sheikh Hasina is now engaged in changing the lot of the people like the way the Bangalees overpowered a powerful force with sticks in 1971.
While handing over the award to Joy, it was mentioned that prime Minister Sheikh Hasina has presented Bangladesh as a role model on the world stage by expanding information technology at the grassroots, introducing universal education system, reaching healthcare services to the doorsteps of the people, improving the living standards of the neglected people of society through social safety net and progress in poverty alleviation and ensuring optimum use of the limited resources.
At the award-receiving function, Joy read out a message of the Prime Minister.
Bangladesh’s Permanent Representative to the UN and President of High-Level Committee on South South Cooperation, Dr AK Abdul Momen, chaired the concluding function of the expo.
Bangladesh Ambassador to the United States Mohammad Ziauddin was also present.
Organization of American States (OAS) and UN South South Cooperation jointly organized the annual exposition.
More than 500 representatives including ministers, diplomats, policymakers, leading NGO personalities, social organizers, educationists, businesspeople, and economists from over 100 nations and top officials of the UN organizations joined the expo.
The exposition is being held every year since 2008 as per a decision of the UN General Assembly. This year’s exposition was the seventh of its kind.
The UN South South Cooperation was established in 2008 with an aim to expand the horizon of mutual cooperation for ensuring overall development of the Southern nations politically, economically, socially, culturally, environmentally and technologically.