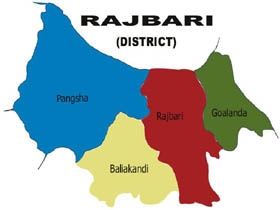 A vice chairman of Pangsha upazila, who was injured in a gun attack at Kacharipara village under Pangsha upazila in Rajbari on Friday, died at Faridpur Medical College Hospital early Saturday.
The victim was Munshi Nader Hossain, 60, also the district unit Krishak League president.
A group of armed miscreants fired two rounds of bullet targeting Nader Hossain while he was going to Pangsha upazila headquarters from his residence at around 9.00am, leaving him critically injured.
He was rushed to Faridpur Medical College Hospital where he succumbed to his injuries at around 12.30 am.
Confirming the death of the vice chairman, Pangsha Police Station Officer-in-Charge (OC) Abul Bashar, said the motive behind the killing could not be known immediately.