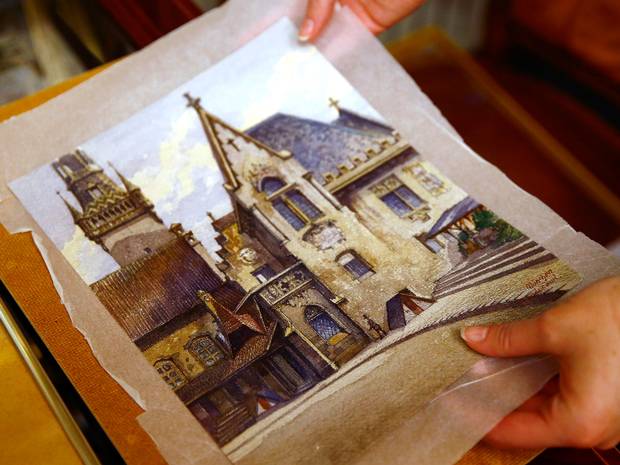 A watercolour painted by Adolf Hitler is set to sell for more than $60,000 at auction due to high interest in the Nazi dictator’s work, reports the Independent.
Created in 1914 during Hitler’s young adulthood, the historical painting of an old registry office will be sold on Saturday in Nuremberg, Germany, where several Nazi rallies took place in the 1930s.
Hitler struggled to make a living as an artist in his late teens and early 20s, painting some 2,000 works, but many critics have branded the auctioning of his work “tasteless”.
Kathrin Weidler, an auctioneer at the Weidler Auction House, said that demand for the painting has been high worldwide, but particularly in America, Japan and Asia.
“I don’t know if all these bidders will actually come to the showroom in person,” she said. “It’s possible, but the last time we had a painting from this artist, that didn’t happen.”
Weidler has requested that any complaints about the auctioning be sent to the city of Nuremberg or the anonymous German sisters selling the painting, titled “Standesamt und Altes Rathaus Muenchen” (Civil Registry Office and Old Town Hall of Munich).
“Those who want to get worked up about this should just go ahead and get worked up about it,” she said. “It’s a historical document.”
The painting comes with a rare handwritten bill of sale dated 25 September 1916 but some critics have queried this after Konrad Kujau was found to have faked authenticity certificates to trick historians with Hitler's Diaries in 1983.
Weidler Auction House has sold five of Hitler’s other paintings in the past for between $6,000 and $100,000. Ten per cent of earnings from the registry office piece will be donated to charity.
Hitler’s hopes of becoming an artist were crushed by repeated rejections from Vienna’s Academy of Fine Arts, according to his autobiography Mein Kampf.