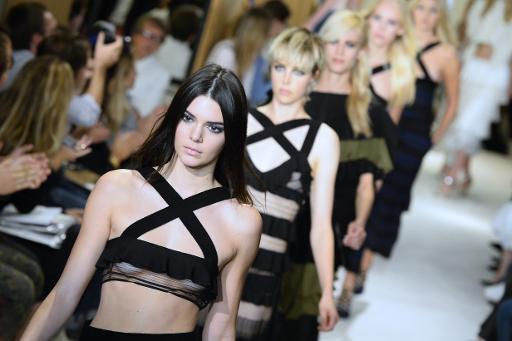 Her elder half-sister Kim Kardashian may have tried to "break the Internet" with a provocative nude photo shoot last week, but Kendall Jenner is taking a more conventional route to fame and fortune.
The slender 19-year-old model has until recently lived largely in the shadow of her more famous, curvaceous sibling, despite featuring regularly in the hit US reality television show "Keeping Up With the Kardashians."
Yet by harnessing her natural beauty to the phenomenal power of social media -- where her followers are counted in the tens of millions -- Jenner is firmly on course to outstrip even her sister for stardom, rapidly emerging as the most prominent of a new generation of supermodels, AFP reports.
Jenner's meteoric modeling rise was crowned this week by confirmation that she is to become the new face of beauty giant Estee Lauder, a golden ticket guaranteed to elevate her burgeoning profile to another stratosphere.
"Cosmetics agents are rare, coveted jobs in the modeling world," explained Sara Ziff, founder of the agency Model Alliance.
"In a business where many models work for free, trading pay for prestige and visibility, these contracts are lucrative and help to build a model's brand."
By choosing Jenner, Estee Lauder has made no secret of its desire to boost sales and growth by targeting younger consumers.
"Kendall is the ultimate 'instagirl,' and we are excited to leverage her image, voice, energy and extraordinary social media power to introduce Estee Lauder to millions of young women around the world," the cosmetics giant's global brand president Jane Hertzmark Hudis explained in a statement.
Whether it is an informal snapshot or her larking around in a Halloween costume with her British model pal Cara Delevingne, or a selfie with pop star Justin Bieber, Jenner rarely misses an opportunity to connect with her legions of followers on social media.
She has a staggering 32.3 million followers tracking her across platforms, including 15.9 million on photo-sharing network Instagram, 9.1 million on Twitter and 7.3 million on Facebook. Estee Lauder describes Jenner's web presence as "astounding."
"Kendall is a modern beauty who represents a whole new generation of women who live, breathe and share beauty, fashion and life 24/7 on their own terms," said Hertzmark Hudis.
The Estee Lauder contract followed a year in which Jenner emerged as a bona fide star of the catwalks, wowing New York audiences at the Marc Jacobs show in February in a revealing sheer top.
That was followed by runway appearances for Chanel, Balmain, Dolce & Gabbana and Fendi as well as a high-profile advertising campaign for Givenchy.
Her rise has also attracted its fair share of backbiting. Several tabloid reports and blogs have suggested that some of her sisters are jealous of her success.
Jenner meanwhile has dismissed suggestions that she owes her fame to the family brand created so successfully by her publicity-hungry half-sister.
"In reality I worked pretty hard for this, running around doing tests," she told ABC television. "It wasn't like I just got it magically and it has just happened."
To that end, Jenner has dropped her last name from her publicity, preferring to be known simply as "Kendall."
She has also reached an understanding with her sister Kim Kardashian, married to hip-hop star Kanye West, that she not attend her runway appearances.
"Banned is a strong word, it is more of a mutual understanding," she said.
"I think if my sister's sitting in the front row, and my sister is who she is, it sounds weird, but it would have almost taken the attention away from what I'm trying to do on my own."
Analysts meanwhile say Estee Lauder's courting of Jenner makes perfect commercial sense.
"It shows the rise of social media as an important distribution plan," said Roger Kay, an analyst with Endpoint Technologies Associates.
"As media shifts over to the Internet and social media from traditional media, this is what the face of new stars will look like."