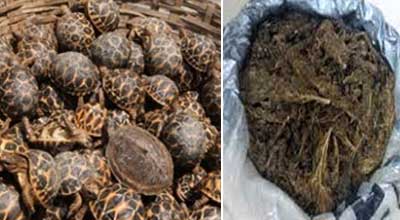 A symbolic photo of Turtles (left) and hemp

Police arrested a youth with 499 turtles of rare species and 36 kilograms of hemp from Singra Bazar on Magura-Jessore Highway under Shalikha upazila in Magura on Thursday morning.
The arrestee is Rafiqul Islam, 35, a resident of Sharsha upazila in Jessore.
Biplob Kumar Nath, Officer-In-Charge (OC) of Shalikha Police Station, said acting on a tip off, a team of police conducted a drive in the area and intercepted a Dhaka-bound microbus coming from Jessore at around 10:00am.
Police recovered the turtles and hemps after searching the vehicle and arrested Rafiqul at that time.
A case was filed in this connection, the OC said.