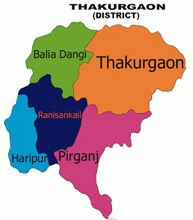 A throat-slit body of young man has been recovered from Dehan village in Thakurgaon Sadar upazila on Thursday morning.
The deceased was identified as Shamsul Haque, 57, son of late Mohammad of the village.
Quoting locals, police said the body of Shamsul was spotted by the locals lying on a road in the area this morning and informed police. The body was recovered and sent it to hospital morgue for autopsy.
Mehedi Hasan, officer-in-charge of Sadar Police Station, said the motive behind the killing could not be known immediately. A case was filed in this connection, UNB reports.