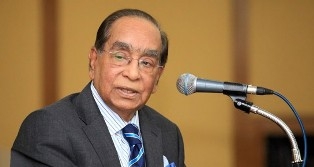 HT Imam, political adviser to Prime Minister Sheikh Hasina, said his statement was published exaggeratedly in media that was given on November 12.
“Media have exaggerated my speech and presented it before people in a wrong way," Imam said.
He came up with the allegation at a press briefing at the Awami League president’s Dhanmondi office in the capital on Monday, four days after his speech.
Regarding BCS issue, he said, “I advised BCL men to absorb themselves in studies for better career. We want to train them as only the candidates eligible for the posts will get the job.”
“You better check the number of BCS job holders and see how many BCL activists got the job.”
Regarding election, Imam said BNP and Jamaat had lost their hope against people’s support towards them.
But, the Awami League has made the government with the support of the people.
“They took the advantage of my speech”, he added.
When asked whether he discussed the issue with prime minister, Imam said, “I did not talk my issue to the prime minister as she is very sick and taking rest.”
“I did not want to disturb her with my personal issues”, He said.
While answering to a query he said, “Media has published a part of my speech. So, there is no question to resign of its basis.”
Mentionable, HT Imam, in a seminar organised by Bangladesh Chhatra League marking the Jail Killing Day on Wednesday (Nov 12), told Awami League-backed student wing Bangladesh Chhatra League (BCL) activists to simply pass the BCS written test and he would see the rest that was widely criticized in the media.