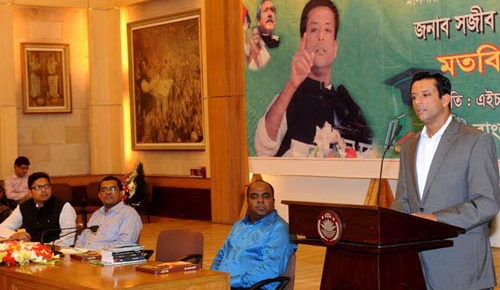 Prime Minister Sheikh Hasina’s Information and Communication Technology (ICT) Affairs Adviser Sajeeb Wazed Joy on Thursday urged the activists of Bangladesh Chhatra League (BCL) not to involve in any activity that defames the organisation.
“My mother has instructed me since my childhood not to defame the name of my grandfather (Sheikh Mujibur Rahman). So, I request you not to do anything that defames the historic Chhatra League,” he said.
Joy, also the son of Prime Minister Sheikh Hasina, came up with the remarks in a views-exchange meeting with the leaders of BCL at Ganobhaban, the official residence of the Prime Minister, in Dhaka.
He said, “I know whenever Awami League is in power, all become Chhatra League and Awami League members to make their personal gains. On top of it, conspiracies are always there against us.”
Joy went on saying, “I want all members of Bangladesh Chhatra League to study attentively to establish themselves, not to extort money.”
He said there are many ways to earn money by dint of merit and honest work as the Awami League government is taking the country forward.