The first photograph of a human being! 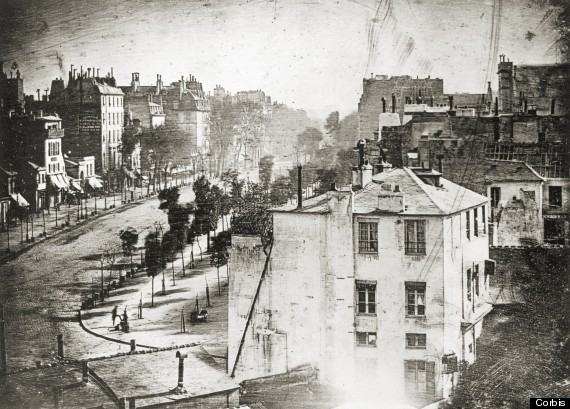 This certainly isn't your average photo.
Taken by Louis Daguerre -- the man responsible for the development of the daguerreotype, a very early type of photography process -- the image below is thought to be the first photograph of a human.
The photo, taken by in Paris in 1838, shows a man who is most likely getting his shoes shined, according to a post by Mashable and Retronaut, a site whose team "mines archives online and offline" to collect thousands pictures from the past.
Although this man is the only clearly visible person in the photograph, Retronaut's Amanda Uren tells The Huffington Post that it's probably because anyone else on the street was moving too quickly to be captured in the photograph.
"The man must have been standing very still, as he is well defined," she said. "The shoeshine boy is mostly blurred out. I'm wondering if the blur behind the man is due to his coattails moving, possibly in a breeze."
How long did it take to snap the picture?
"Length of exposure would have been variable depending on how the plate was prepared, the amount of light available and the lens in the camera," Uren continued. "In order for most of the people and carriages to be blurred out, it must have been a matter of minutes. Ten minutes seems to be the consensus."
Daguerre developed his first successful picture in 1837, PBS notes. While he believed he had stumbled upon something genius, the process didn't start taking off until 1839, after scientist Francois Arago agreed that photography was something special.
So, how long did it take for selfies to come about? Apparently, not long at all.