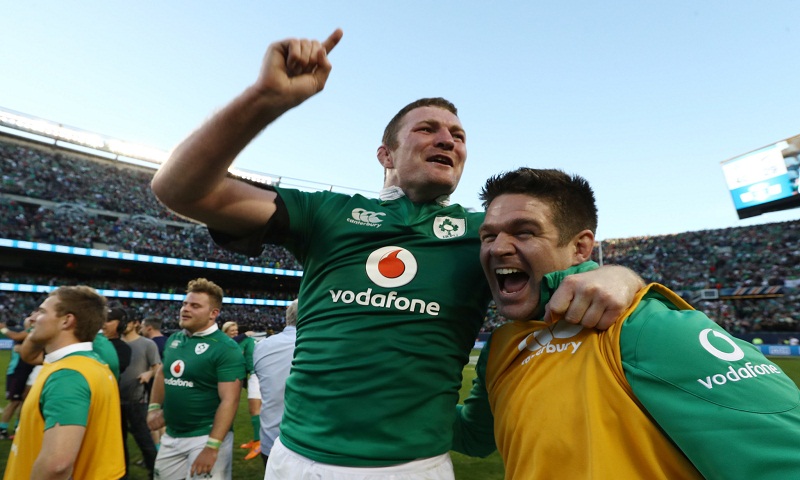 Ireland produced a stunning display to record a first ever win over New Zealand at the 29th attempt and end the All Blacks' run of 18 straight wins.

Tries from Jordi Murphy, CJ Stander and Conor Murray helped the Irish to a 25-8 half-time lead, then Simon Zebo scored his side's fourth try in the corner.

The world champions fought back to move to within four points but Robbie Henshaw's late try ensured the victory.

The sides will meet in another Test match in Dublin in two weeks' time.

This was Ireland's first success over the Kiwis in 111 years and it came about in sensational fashion as Joe Schmidt's men repelled a stirring second-half comeback by Steve Hansen's side.

TJ Perenara, Ben Smith and Scott Barrett added to George Mola's first-half try for the New Zealanders but despite some sustained late pressure, they fell short for the first time in their past 19 encounters with top-tier nations.

The match was the first of four autumn internationals for both sides, played in front of a capacity crowd of 60,000 at Soldier Field in Chicago, a venue chosen in an attempt to increase the exposure of the sport.

The teams will meet again at the Aviva Stadium in a fortnight after Ireland host Canada next Saturday and Steve Hansen's side face Italy in Rome on the same day.

From the start, the Irish effort appeared to be fuelled by the memory of former international and Munster head coach Anthony Foley, who died suddenly last month.

Prior to kick-off Ireland lined up in the shape of a number eight, the jersey worn with distinction by Foley for many years, while their opponents performed their traditional pre-match haka.

Ireland made light of the aura of invincibility surrounding the three-time world champions in a first half which they mostly dominated to go in 17 points to the good at the break.

Schmidt's side produced a performance of accuracy, purpose, pace and skill as they denied the All Blacks quality possession and repeatedly frustrated their efforts to win their own line-outs.

The Irish display bore echoes of the Test between the sides in Dublin in November 2013 when they built up a 19-0 lead, before ultimately losing 24-22 after conceding a last-gasp converted try, but there was to be no repeat of that outcome this time.

Moala raced through for a fifth-minute try after Waisake Naholo had carved a way through the Ireland defences but the turning point of the opening period came when front-rower Joe Moody was yellow-carded for a tip tackle on Robbie Henshaw.

Ireland made good use of the prop's 10-minute absence as Murphy rumbled over after a rolling maul and then fellow flanker Stander surged over the line following a break by Rob Kearney.

Murphy was subsequently carried off after turning his knee in a freak incident but seven minutes before the interval Murray produced a moment of magic, darting through a gap in the New Zealanders' defence to run in his third try in five Tests against the Rugby Championship winners.

The All Blacks' half-time deficit equalled their biggest ever at that stage of an international match.

Ireland hold out in thrilling second half

The Irish momentum continued on the resumption, their relentless defensive efforts thwarting the normally ruthlessly efficient All Blacks, and Zebo increasing the advantage by touching down in the corner.

Replacement Perenara reduced the arrears by diving over near the posts and then full-back Smith managed to ground the ball beside the flag before being tackled into touch by Andrew Trimble.

Scott Barrett took advantage of some poor Ireland tackling to score on his international debut and when brother Beauden knocked over his third conversion of the game, the All Blacks trailed by just four.

Ireland continued to defend heroically however, forcing their opponents into a series of uncharacteristic errors, and a historic triumph was assured when Henshaw showed raw strength to score under the posts after Jamie Heaslip broke clear.