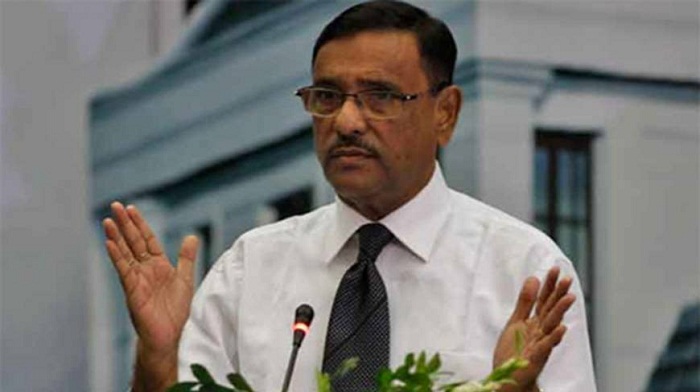 Road Transport and Bridges Minister Obaidul Quader on Sunday said communalism and terrorism are the major challenges for the Awami League-led government.

"Terrorists are now silent due to the government's stern action against them," he told a dialogue at media center in Bangladesh Secretariat here.

Bangladesh Secretariat Reporters Forum (BSRF) organised the dialogue with its president Shyamol Sarkar in the chair, while general secretary of BSRF Siddiqur Rahman moderated it.

Quader, elected the ruling Awami League's general secretary through a two-day national council, said militants seemed to have lessened following actions taken by law enforcers but it did not mean that militants left Bangladesh.

"They (militants) might be taking preparation for bigger attacks in the country. We will prevent them with the cooperation of the common people," the minister said.

He said: "There is no room for terrorists and no compromise with them."

Quader said that around Taka 30,000 crore would be spent for the bridge and Bangladesh proved its efficiency, adding, "The World Bank president visited the country when one-third contraction work of the Padma Bridge has been finished."

"The World Bank made a great mistake for lifting its involvement from the Padma Bridge project and none can take such challenge except Prime Minister Sheikh Hasina," he said.

Giving details of the Padma Bridge construction work, the minister said that a total of 45 spans would be installed and two of them were installed, while another one is underway.

"We have proved that Bangladesh has capacity to take any challenge and the country would be a middle income one by December 2018, materializing the vision-2021," he said.

Replying to a query, he said the construction of the metro rail (MRT-6) is going on and seven Japanese were killed by militants at holy artisan hotel engaged in feasibility study for MRT-1 and MRT-5.