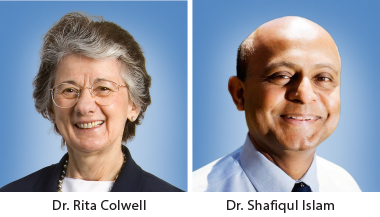 The prize was awarded to the team of Dr Shafiqul Islam (Tufts University, USA) and Dr Rita Colwell (University of Maryland at College Park) for their outstanding performances in developing and testing a model that uses chlorophyll information from satellite data to predict cholera outbreaks at least three to six months in advance, according to the official website of PSIPW.

Dr Rita Colwell is an internationally-acclaimed oceanographer and microbiologist who has spent the bulk of her career studying the V. cholerae bacterium that causes cholera. She and her colleagues have found V. cholerae in oceans around the world, in isolated lakes and rivers untouched by fecal contamination, and even in volcanic springs in Iceland.

Colwell and her team were the first to use remote satellite data to develop a predictive model for cholera outbreaks in East Asia, and she is the first scientist to link global warming with a potential rise in cases of infectious disease.

Dr. Shafiqul Islam has applied Colwell's findings to relate chlorophyll levels and cholera outbreaks in the Bay of Bengal.

Using satellite data from NASA, he developed a satellite-based model to predict potential cholera outbreaks at least three to six months in advance.

The model has been tested with chlorophyll information from satellites over the Bay of Bengal region to predict cholera outbreaks in Bangladesh.

The team is currently working on testing the model with ground-based observations.

The 7th PSIPW Award was announced on October 5 and the Awards giving ceremony will be held at the United Nations headquarters in New York, NY on 2 November 2016.