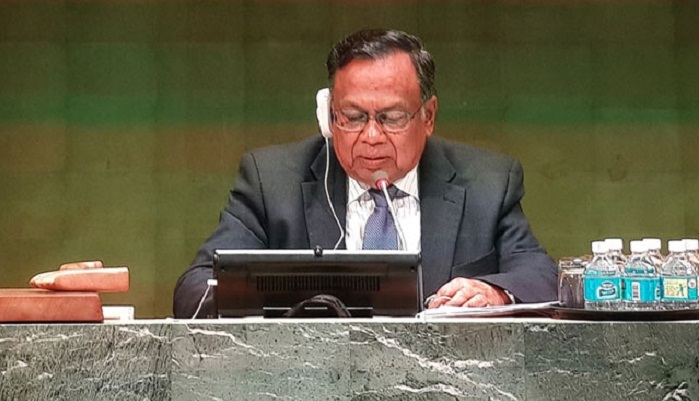 Bangladesh has reiterated its commitment to remain one of the first responders to the UN's call for troops and police.

Foreign Minister AH Mahmood Ali, now in Paris, conveyed the message on Thursday at the Ministerial Conference on 'Peacekeeping in Francophone Environment' held at the International Convention Centre there, according to a message received in Dhaka from Paris.

He highlighted the efforts of Bangladeshi peacekeepers in ensuring sustained peace in the conflict-affected areas.

The Foreign Minister underscored the need for intelligence, modern technologies, and advanced equipment to serve the peacekeepers' vital interest on the ground, particularly to enhance their capacity for maintaining peace, protecting civilians and ensuring their own safety and security.

He also highlighted Bangladesh's commitment to increase women's participation in the UN peacekeeping missions in the coming days.

Mahmood took part at the Ministerial at the invitation of Jean-Marc Ayrault, Minister for Foreign Affairs and International Development of France.

The conference, organised by France, aimed at strengthening the peacekeeping mechanism in the French-speaking environment.

Harvey Ladsus, UN Under Secretary General (USG) for Peacekeeping, French and Canadian Foreign Ministers, among others, highly praised the Bangladeshi peacekeepers deployed in the Francophone Missions.

Meanwhile, the Bangladesh Foreign Minister held a bilateral meeting with his French counterpart on the same day.

They expressed satisfaction over the existing level of cooperation between the two countries and assured each other of further engagement on the issues of mutual interests.

Baroness Joice Anelay, British Minister of State for the Commonwealth and the UN at the Foreign & Commonwealth Office, also met Mahmood.

Later on the day, Bangladesh, French, Canadian and Senegalese Foreign ministers briefed the press and media on the conference.

As many as 60 countries and international organizations, including 20 ministerial delegations, took part in the conference.

The Ministerial Conference was preceded by four thematic roundtables held on Wednesday where Bangladesh co-chaired the roundtable-1 on Force Generation.