7 Journalists murdered with impunity in a decade 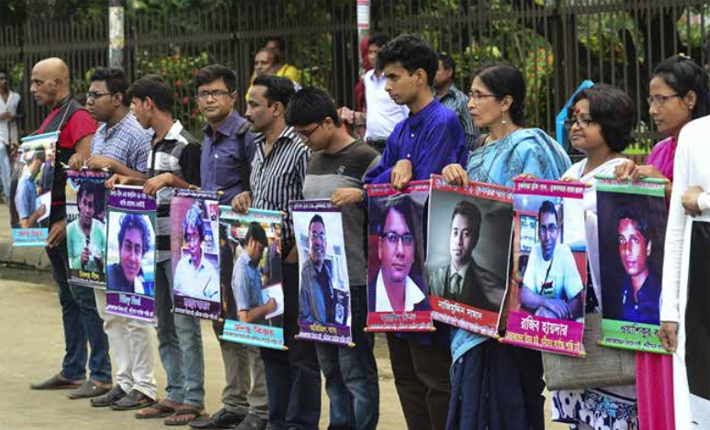 Protesters in Dhaka hold images of writers and activists murdered by extremists. Secular bloggers are the journalists most at risk for their work in Bangladesh.

Bangladesh has been spotted 11th among 13 countries’ list of CPJ’s latest Global Impunity Index which spotlights countries where journalists are murdered and their killers go free in the past decade.

The Committee to Protect Journalists (CPJ) on Thursday published the 2016 global impunity index on Thursday.

For this edition, CPJ analyzed journalist murders in every nation that took place between September 1, 2006, and August 31, 2016. Only those nations with five or more unsolved cases for this period are included on the index-a threshold that 13 countries met this year, compared with 14 last year.

Sri Lanka has been dropped off the list for the first time since CPJ began calculating the index in 2008.

CPJ recorded only four unsolved murders in Sri Lanka for the latest 10-year period, leading to its elimination from the index.

More countries on this year's index participated in UNESCO's impunity accountability mechanism, which requests information on the status of investigations into killed journalists for the UN agency's biennial report on journalist safety.

Six countries on the index- Bangladesh, Brazil, Pakistan, the Philippines, Russia, and Somalia- convicted perpetrators of journalist killings in the past year, up from three countries in the previous year's report.

“Despite some arrests, only one murder from the past decade has been fully prosecuted,” the CPJ said in the report’s Bangladesh chapter, terming such development a setback.

According to the index, seven Bangladesh journalists were killed in the decade with “complete impunity”.

This year, only three states among the 13 index countries-- India, South Sudan, and Syria-- failed to respond.

The other findings from CPJ's data on murdered journalists

The combined data from the 13 countries on the index account for 80 percent of the unsolved murders that took place worldwide during the 10-year period ending August 31, 2016.

Eight of the 13 countries on the Impunity Index have been listed each year since CPJ began the annual analysis in 2008, an indication of how entrenched impunity is in some nations.

Despite their poor records in achieving justice, four countries on the Impunity Index-India, Mexico, Nigeria, and the Philippines-are on the governing council of the Community of Democracies, a coalition dedicated to upholding and strengthening democratic norms.

In the past decade political groups, including Islamic State and other extremist organizations, are the suspected perpetrators in more than 40 percent of murder cases. Government and military officials are considered the leading suspects in nearly a quarter of the cases in the same period.

Around 95 percent of victims were local reporters. More of them covered politics and corruption in their home countries than any other beat.

In at least 40 percent of cases, the victims reported receiving threats before they were killed. Threats are rarely investigated by authorities and in only a handful of cases is adequate protection provided.

In the past 10 years, around 30 percent of murdered journalists were first taken captive, the majority of whom were tortured, amplifying the killers' message of intimidation to the media community.

In only 3 percent of total murder cases over the decade has full justice, including the prosecution of the masterminds, been achieved.