Bangladesh empahasise on security in ocean for trade 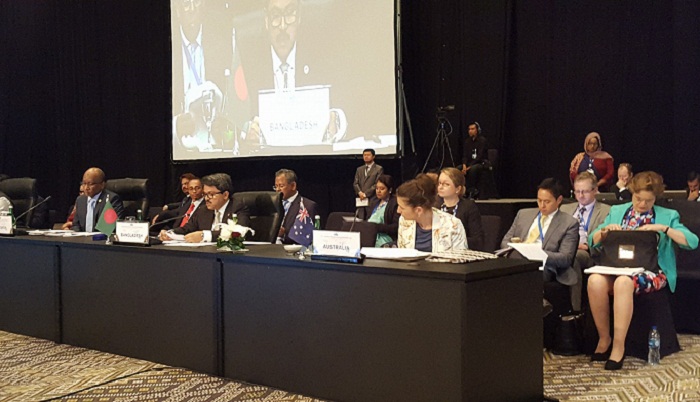 “Safety and security in the ocean remain a priority concern for trade, economic growth, and many other reasons,” he said.

The State Minister was leading Bangladesh delegation at the 16th Council of Ministers Meeting of the IORA held in Bali hosted by Indonesia, the current Chair of the association, UNB reports.

The State Minister highlighted six priority areas of the organization blue economy, trade and investment facilities and tourism, academic, science and technology and safety and security.

Delegations from its 21 Member States at the Ministerial and State Ministerial level which included Australia, India, Indonesia, South Africa, Sri Lanka, Malaysia, Mauritius, Singapore, the UAE and Comoros among others attended the meeting.

The meeting was also attended by seven Dialogue Partners of the association, according to a message received here from Bali.

The IORA is going to hold its first ever IORA Leaders’ Summit at the Heads of Governments level on March 7 in Jakarta to commemorate the 20th Anniversary of its establishment.

In the Summit, the heads of government and leaders of the IORA member States are expected to sign the IORA Concord along with an Action Plan to implement the Concord decisions.

The State Minister said the blue economy is an evolving concept in development dynamics and it is gaining rapid ground as newer technology and techniques are in the offing to explore the resources offered by sea.

He said the second Economic and Business Conference in the UAE ushered in the new era in ocean-based trade and development. “To realize the full potentials in the tourism sector, we need to consider liberalization of visa regime and enhance land, air, and maritime connectivity within the region.”

He appreciated IORA’s feasibility study on tourism and hoped that they will be able to have a clear set of ideas for our leaders to decide in this regard in their summit in March.

On security issues, Shahriar said maritime piracy, armed robbery, human trafficking, illegal arms trafficking, IUU fishing are the key maritime challenges of the region and IORA needs to assume an important role in combating these challenges. “To this end, a regional method under Sendai Framework needs to be put in place,” he added.