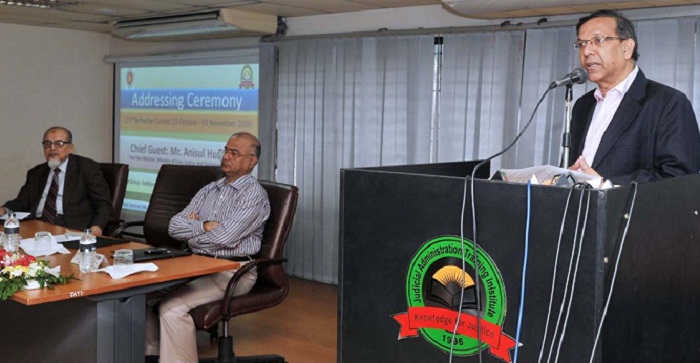 Law Minister Anisul Huq on Wednesday said trials of assaulting and raping children will be conducted by the speedy trial tribunals for swift disposal of cases.

The minister also urged the prosecution to be more active in ensuring maximum punishment within quickest of time for the people guilty of such crimes.

"Such heinous crimes will not occur in the future if we be able to ensure fast and maximum punishment for the perpetrators. No one will dare to commit such crimes again then," Huq said.

The minister came up with the observations while talking to newsmen after inaugurating a training course for judicial officers at the Judicial Administration Training Institute (JATI) in the capital, BSS reports.

Terming the recent statement given by Chief Justice to relocate the International Crimes Tribunal to district level as his personal one, Huq said this trial is the reflection of people's will.

"We will give reply very soon to the Supreme Court letter sent in this regard," he added.