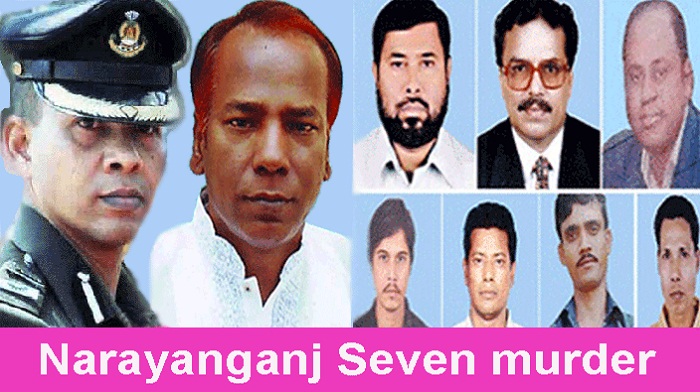 Four of the accused in the sensation seven-murder case pleaded not guilty before a Narayanganj court on Monday.

Public prosecutor Advocate Wajed Ali Khokon read out the allegations brought against the four accused in the presence of 19 other accused after they were produced before the court of senior district and session’s judge Syed Enayet Hossain in the morning.

Of the four accused, Nur Hossain and Tarek Sayeed Mahmud claimed themselves innocent although they did not give any written statement for self-defence while Arif Hossain and Masud Rana pleaded not guilty in writing.

The court also fixed October 31 for the other accused to defend themselves.

On April 27, 2014, Narayanganj panel mayor Nazrul Islam, his three associates and driver were abducted by miscreants from Fatullah area of Narayanganj.

At the same time, senior lawyer at district Judge's Court Chandan Kumar Sarker and his driver were also abducted on their way to capital Dhaka.

Three days after their abduction, the bodies of six people, including those of Nazrul and Chandan Kumar, were recovered from the Shitalakhya River on April 30 the same year. The following day, the body of Jahangir, car driver of Nazrul Islam, was also recovered from the river.