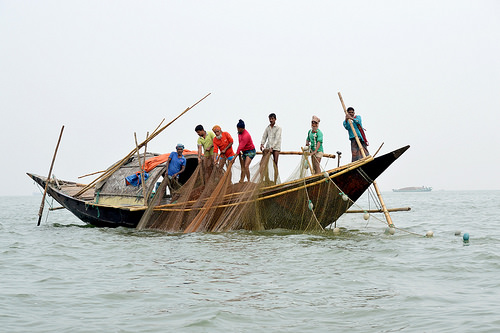 A mobile court here on Monday morning sentenced 57 fishermen to different jail terms and fined all of them for catching hilsa in the Padma and Jamuna rivers defying the ongoing ban.

A team of the mobile court jointly led by Shibaloy upazila executive magistrate Kamal Mohammad Rashed and acting upazila fisheries officer conducted a drive at different points of the Padma River and arrested 43 fishermen while they were catching hilsa fish early in the morning, said the district fisheries officer Nurtajul Haque.

Later, the arrestees were produced before the mobile court which sentenced them to different jail terms and imposed fines on each of them as well.

Meanwhile, a team of Doulotpur Police Station conducted a drive in different points of the Jamuna river and arrested 14 fishermen. As the arrested were produced before a mobile court, they were also penalized with jail terms and fines.

The government has imposed a ban on catching, selling, transportation and hoarding of hilsa from October 12 to November 2.