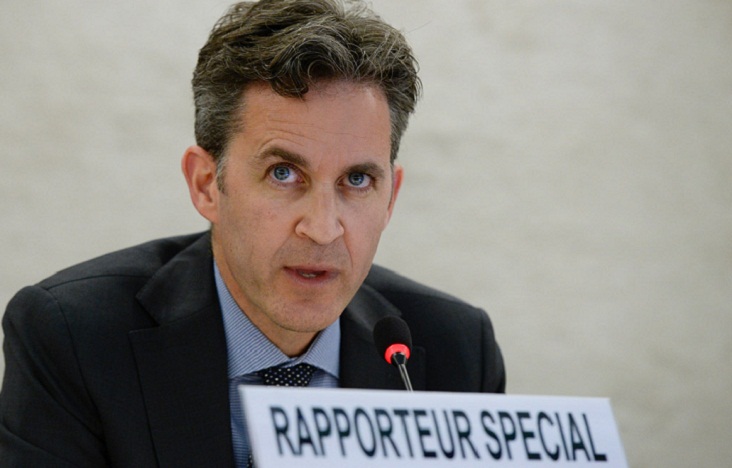 There is no question that governments worldwide are wielding the tools of censorship, warns the United Nations Special Rapporteur on the freedom of opinion and expression.

Special Rapporteur David Kaye came up with the observation in a report on the widespread global assault on the freedom of expression to be presented to the UN General Assembly on Friday.

“Governments are treating words as weapons, adopting vague laws that give officials massive discretion to undermine speech and opinion,” Kaye was quoted as saying in a message received here from New York on Thursday.

Kaye said the governments are punishing journalists for their reporting, silencing individuals for posting opinions on social media, shutting down debate and the flow of information on grounds of counter-terrorism, protecting public order, sheltering people from offense.

The expert noted that censorship in all its forms reflects official fear of ideas and information. “And it not only harms the speaker or reporter or broadcaster, it undermines everyone’s right to information, to public participation, to open and democratic governance.”

The report involved a survey of hundreds of official communications the rapporteur has issued to governments, which resulted from allegations of violations of well-established international human rights law received from individuals and non-governmental organizations worldwide.

The trend lines are stark, Kaye said adding that he is especially concerned that many governments assert legitimate grounds for restriction, such as protection of national security or public order or the rights of others, as fig leaves to attack unpopular opinion or criticism of government and government officials.

“Many times governments provide not even the barest demonstration that such restrictions meet the legal tests of necessity and proportionality.”

Those who carry out physical threats, particularly to journalists and writers and bloggers, are rarely held accountable, Kaye added.

“Online, threats to expression are getting worse. Advances in technology have triggered new forms of repression and censorship that undermine everyone’s ability to hold opinions or seek, receive and impart information and ideas.”

One of the biggest threats to online expression is the use of Internet ‘kill switches.’ More than a dozen network shutdowns have been recorded in the last year.

Internet shutdowns are just one form of digital censorship among many adopted by governments today.

The report notes areas of positive developments as well. The Special Rapporteur welcomes, for instance, examples where governments, legislatures, and domestic and international courts have taken strong steps to promote freedom of expression or carefully evaluate restrictions.

In his study, the human rights expert urges all governments to review their national laws to ensure strong protection and promotion of the freedom of expression, in particular to limit the discretion officials may enjoy to restrict the flow of information.

“The approach that many governments adopt towards freedom of expression today is abusive and unsustainable,” Kaye stressed. “Governments must not only reverse course, but also take the lead in ensuring its protection.”