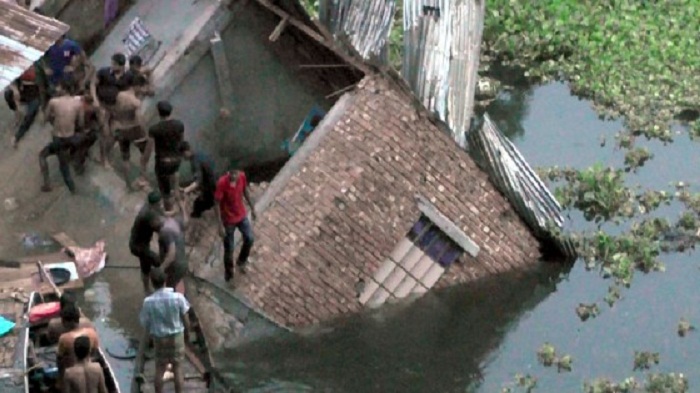 At least four people, including a man and his daughter, were killed after a 2-storey building collapsed into Kaptai Lake in Rangamati town on Tuesday evening.

Among them, bodies of the four victims were recovered, two others are believed to be trapped inside the building while rest are safe, Chittaranjan initially told UNB, adding that they are not confirmed yet whether the two people are alive.

Witnesses said the building adjacent to the Kaptai Lake suddenly collapsed into the lake in the Government Women’s College area around 5:45pm, leaving its inmates trapped inside the building.

However, some family members managed to come out of the building.

On information, three firefighting units, Bangladesh Army and police rushed in and recovered the body of Habiba and rescued a driver, Zahid, and Pinky from the wreckage.

The duo was taken to Sadar Hospital where doctors declared them dead.

Later, the rescuers recovered another body of a child from the building, ASP Chittaranjan Pal said.

The rescue operation with the help of local people was on till filing of this report around 11:30pm.

Golam Mostafa, assistant director of Fire Service and Civil Defence in Rangamati, said they are facing difficulties in conducting their salvage operation for lack of sufficient light.

It remains unclear how many remain trapped, and how many were rescued till 11:30pm.