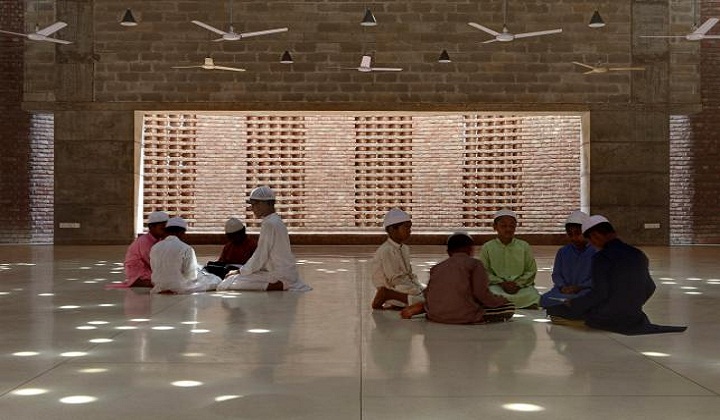 Two Bangladeshi architectural projects were among the winners of the 2016 Aga Khan Award for Architecture, a statement from the globally-known charity says on Monday.

The Bangladeshi projects are a mosque in Dhaka and a community centre in Gaibandha.

Presented once every three years, the award was established by the Aga Khan in 1977 to “identify and encourage building concepts that successfully addressed the needs and aspirations of communities in which Muslims have a significant presence.” The winners were announced on Monday in the United Arab Emirates city of Al Ain.

Praising the Bait Ur Rouf Mosque in Dhaka, developed by Marina Tabassum Architects, the award jury panel says: “In a transitional area caught between urban hyper-density and rural proximity, the terracotta mosque is an exquisitely proportioned building that is both elegant and eternal. Funded primarily by community donors, the mosque design challenges the status quo and understands that a space for prayer should elevate the spirit. The mosque does so through the creation of an interior space that is rich with light and shadow, but at the same time possesses a robust simplicity that allows for deep reflection and contemplation in prayer.”

The jury panels describes the NGO Friendship’s training facility and community centre in Gaibandha, developed by Kashef Chowdhury and Urbana, as: “The integrative design approach is registered in every aspect of the project, and at every scale. The imbrication of outdoor and indoor spaces, together with the treatment of the roofscape, make this an unusual and innovative building. With its spaces sunk into the ground and the vegetation growing on its roofs, the compound blends beautifully into the natural surroundings. Its relationship to the landscape and to history and archeology is remarkable in every way.”

Selected from a shortlist of 19 candidates, the winning projects will receive a $1m prize as they join an acclaimed list of previous winners, which includes buildings from Norman Foster, Charles Correa, Frank Gehry, Jean Nouvel and Hassan Fathy.