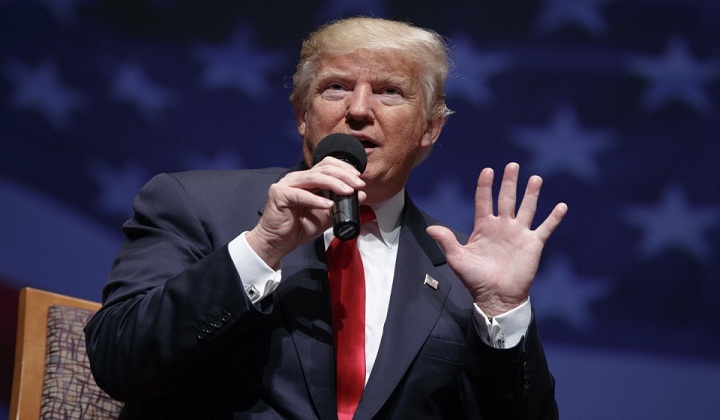 Donald Trump vowed Friday that if Iran inappropriately approached US ships, they would be "shot out of the water."

"And by the way, with Iran, when they circle our beautiful destroyers with their little boats and they make gestures that our people -- that they shouldn't be allowed to make, they will be shot out of the water," he said at a rally here.

Taking such action would have tremendous ramifications and would likely be considered an act of war. The comments, even given Trump's penchant for tough language, are unusual for a presidential candidate.

Trump appeared to be referring to a series of close encounters between the US and Iran in international waters in the Persian Gulf.

An Iranian ship came within 100 yards of a US Navy patrol ship earlier this week in what the US Navy described as an "unsafe and unprofessional" action involving "harassing maneuvering."

And late last month, a US Navy patrol craft fired three warning shots at an Iranian Revolutionary Guard Corps boat after US officials said it had harassed two US ships. Another US patrol craft and a Kuwaiti Navy ship were also harassed in the northern end of the Persian Gulf.

Iran has also flown drones over US ships and in one of the most intense confrontations between the US and Iran, Iranian troops took US sailors into custody in January after the US naval ship accidentally strayed into Iranian territorial waters.

The US has condemned Iran's actions but hasn't responded militarily to the provocations.

Those actions come against the backdrop of renewed US diplomatic contacts with Iran, which has triggered a political backlash among Iranian hardliners.

But Trump, the Republican nominee, has repeatedly argued that Obama has been too "weak" on the world stage and vowed a more aggressive posture, including threatening more serious military action.

Trump has vowed to "bomb the s--- out of ISIS" and has left open the possibility of using nuclear weapons as president.

He also has suggested that he would bomb ISIS targets in Libya, expanding the US fight against the terrorist group.