PM rules out any harm to Sundarbans from Rampal power plant 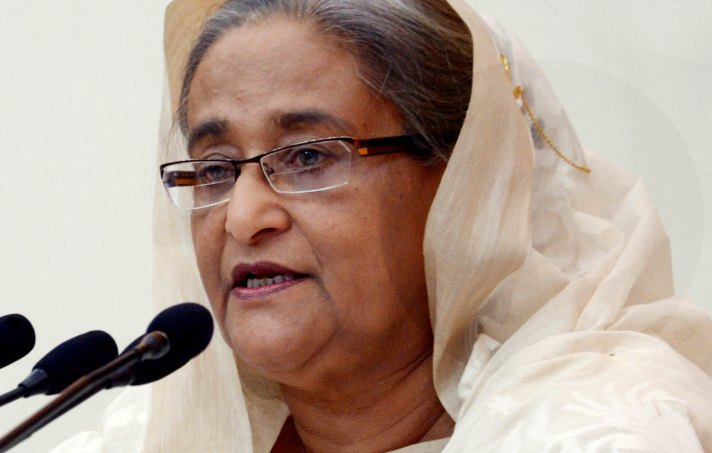 In the press conference the Prime Minister came up with necessary information, data and study report saying "I would be the first person to protest against the power plant if it would have any little impact on Sundarbans."

Prime Minister Sheikh Hasina today reiterated her government's firm stand for coal-based power plant at Rampal, 65 kilometers away from mangrove forest Sundarbans, saying the power plant would not cause any harm to the world heritage famous for home of Royal Bengal Tigers and rich biodiversity.

At a press conference at her Gonobhaban residence here this afternoon the Prime Minister ruled out the claim of a certain quarter that the power plant would destroy the mangrove forests.

Recalling the announcement of UNESCO declaring the Sundarbans as a world heritage site in 1997, the Prime Minister said the recognition was earned during the time of Awami League government due to its effective initiative.

Blasting BNP chairperson for joining the propaganda against the power plant, the Prime Minister said, "Position of BNP chairperson is like that of showing more sympathy to a child by aunty than one's mother."

Sheikh Hasina said the proposed Bangladesh-India Friendship Thermal Power Plant at Rampal is one of those coal-based plants the government has decided to install in different parts of the country to meet the growing electricity demand and reach the electricity to people at a logical price.

But, a vested section against development has been spreading negative, baseless, fictitious and misleading information among people for the last few days and trying to make them fearful of the project, she said.

Saying that BNP chairperson's joining with the propaganda on August 24 last seemed to have her deep conspiracy, the Prime Minister said asking "otherwise why she (Khaleda) has come up in public with her negative attitude after a long time of beginning of the construction work of the power plant?"

"Khaleda Zia was giving instigation from inside. With the press conference on August 24 last she also joined that propaganda," Sheikh Hasina said, observing that there might have a deep conspiracy behind Khaleda's public appearance with the quarter opposing the power plant.

The Prime Minister said all the information and data furnished by BNP leader about the power plant are 'false, fabricated and misguiding'. She has come up with the false information to misguide the people, she said.

Terming the coal as the most reliable resource of future energy, the Prime Minister said in near future it would be impossible to continue supply of natural gas to the country's gas-based power plants. Developed countries like USA, France, Germany, China, Japan and neighboring India meet about 40 to 98 percent of their electricity demand with coal-based power. But, coal-based power in Bangladesh is a little bit more than one percent, she said.

The press conference of the Prime Minister was held against the backdrop of a constant propaganda and agitation by a group of people to press home their demand to abandon construction of the Rampal Power Plant and finally Khaleda Zia's support to the campaigners.

In the press conference the Prime Minister came up with necessary information, data and study report saying "I would be the first person to protest against the power plant if it would have any little impact on Sundarbans."

The Director General of power cell Mohammed Hossain gave a presentation on different aspects of the project before the speech of the Prime Minister.

"Hundred years ago the size of Sundarbans was bigger than present. The forest constantly lost its mass over the years because of over exploitation. For the first time our government has taken massive measures for its protection," she said.

The Prime Minister said her government has taken steps for alternate employment of the 'bawalis' of Sundarbans to stop cutting of sundari trees. New plantation drive has been taken while restriction has been imposed on tree felling, she said.

Sheikh Hasina said one of the reasons of the dwindling of the Sundarbans is climate change. But climate change and global warming are not limited within the geographical periphery.

Highlighting horrible situation of the power sector in the past, the Prime Minister said constant power supply is very important for country's socioeconomic development as well as public comfort and relax. But the reality is that no government in the past had taken any steps for sustainable power generation, she said.

"The role of BNP in this regard is not beyond description," Sheikh Hasina said adding that the party came to power for two times since 1991, but didn't take any measure to increase a single megawatt of power. In 2001, she said, BNP has done brisk business on electric pole only."

Recalling the incident of killing 14 electricity-hungry people in police firing in Chapainawabganj in 2006, the Prime Minister said power generation was 4,300 MW when Awami League handed over power in 2001. But it declined to 3,200 MW during BNP's 2001-2006 rule.

Sheikh Hasina said the country would need 24,000 MW power in 2021 and 60,000 MW by 2041. In view of this, she said, the present government has prepared a roadmap with many long and short term projects including quick rental power plants.

The group of people who are opposing the Rampal power plant also opposed the government initiative for quick rental power plant to meet up immediate demand of electricity in 2009, she said.