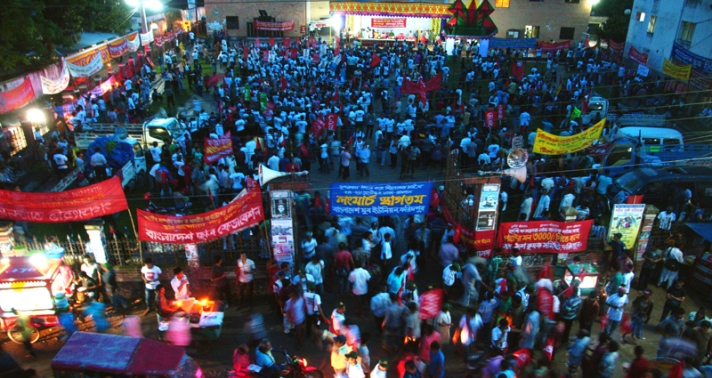 National Committee to Protect Oil-Gas-Natural Resources and Power-Port on Saturday announced fresh action programmes, including demonstration towards Prime Minister’s Office (PMO) on July 28, in protest against the signing of a contract for implementing the Rampal Power Plant project near the Sundarbans, reports UNB.

A protest procession will be brought out on the day from the Jatiya Press Club at 11 am towards the PMO.


Leaders of the National Committee announced the programme at a press conference at Mukti Bhaban in the city.

The other programmes included countrywide demonstrations on July 18 and a rally in front of the Jatiya Press Club at 4 pm, road march in Dhaka and in the districts around Rampal project on July 19-25.

Bangladesh-India Friendship Power Company Ltd (BIFPCL), a joint venture company formed by Dhaka and New Delhi, signed a contract on July 12 in with Indian contractor BHEL to install the plant.

“The circumstantial evidence suggests India is so much aggressive to implement the Rampal project to make their presence in the Bay of Bengal,” he told reporters.

He said Bangladesh’s strategy should be getting out of Rampal project as soon as possible as this project will be harmful for bilateral relations between India and Bangladesh.

Committee member engineer Kallol Mostafa made a presentation on the Rampal power plant’s negative impact on the Sundarbans.