US Stocks Surge to Record Highs 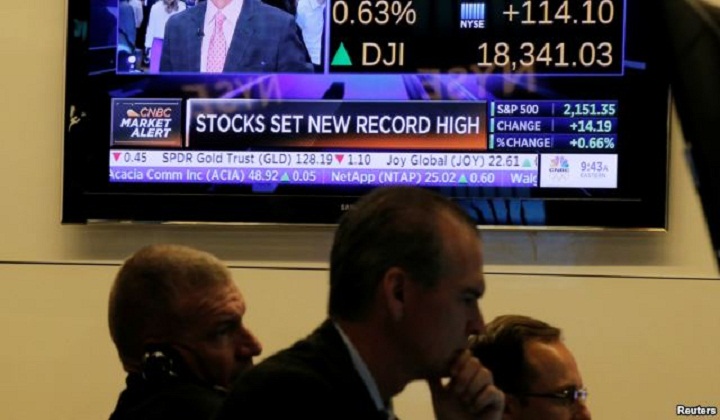 U.S. stock indexes surged to record highs Tuesday, with investors heartened by the big advance in the country's labor market last month, even as they ignored the uncertain economic effects of the British vote to leave the European Union.

In the last hour of trading in New York, the Dow Jones industrial average of 30 key stocks advanced past its all-time high closing high of 18,312, set in May 2015. The broader Standard & Poor's index of 500 stocks also pushed past the record it set a year ago, and the technology-heavy Nasdaq index turned positive for the first time in 2016.

The markets seemed buoyed by last Friday's government report that U.S. employers added 287,000 jobs in June, far surpassing the very weak figure of 11,000 in May, and lessening fears that the United States could be headed toward an economic downturn. Analysts also said that fears about Britain's vote to leave the EU had eased, with Tory leader Theresa May about to take over as prime minister.

Earlier this year, the S&P index, seen as a wide-range barometer of the value of U.S. corporations, had dipped, at least in part because of global events — plunging world oil prices, currency devaluations in China and the British vote. But now the index has jumped 17 percent since February.

The U.S. economic advance has been uneven since the country's steep recession in 2008 and 2009, when the U.S. labor market was losing 800,000 jobs a month in the biggest economic turmoil since the Depression of the 1930s.

But the unemployment rate in the United States, the world's biggest economy, is now at 4.9 percent, very close to its historical average, even as many workers still lag in finding jobs that pay as much as those that were lost in the recession.