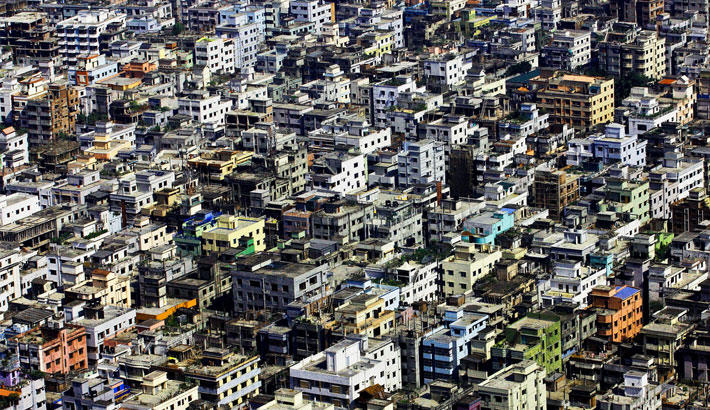 The government has identified about 72,000 buildings in Dhaka city which are vulnerable to earthquake

After publishing the breakthrough study on risk of mega earthquake in Bangladesh, scientists urge for ‘calm’ and stress on better buildings.

Are Bangladesh and neighboring countries are really at risk of great Earthquake than other parts of the world? Exactly which areas of Bangladesh are more vulnerable? And can we have something to predict the level of destruction and to build better cities to face such a calamity?

A latest study published on Monday tried finding answers to these questions. The study published on Nature Geoscience found that, parts of eastern Bangladesh, India and northern Myanmar are sitting on a 124 miles (200 kilometers) wide fault area spring-loaded with massive tectonic pressure.

If the result of years-long study is credible, then this region of 140 million is at risk of earthquakes up to magnitude 9.0, like 2011 Japan quake, once the entire fault give way to a mega-thrust.

Plate boundaries and major faults are shown in black and grey, respectively.
Source: Michael S. Steckler and others, Nature Geoscience, 2016.

Co-author of the study, Professor Syed Humayun Akhter PhD thinks it’s a bad news and good news. Professor Akhter is a faculty of Geology at the University of Dhaka.

Sitting atop such an active fault-line is bad news for sure, he said to Daily Sun on Tuesday. But on the other hand, ‘based on last ten years’ data, newly built scenario of this geological zone will help explain and reduce the risk’.

‘Earlier we had talks and fears based on indiscriminate reference to latest seismic events, this data gap is now removed’, the seismologist said.

Bring geology at the table

Exactly what implication the study can bring to life of millions of urban people who intermittently get to see mid-sized quakes, deaths and destruction in the region?

‘Well, panic among the people should not be an outcome of our study. What we’d like to see now is our urban planning is more earthquake sensitive with the involvement of the geologists’, says Akhter. In case of the metropolis of Dhaka with almost 20 million people, though it’s not possible to start afresh, but he says, there are enormous opportunities to bring positive changes within current landscape and infrastructure.

To do that, ‘to reduce the risk of destruction by earthquake, urban planning should be primarily based on geological knowledge, which is now largely absent in Bangladesh’.

Use of geological data will enable the authorities and citizens to reshape every step of land use, settlement layout and building quality planning to mitigate risk of massive earthquakes, he added.

Rather than highlighting ‘potential catastrophe’, leading author of the study Professor Michael S. Steckler PhD thinks, ‘What we need is calm awareness so that people undertake more earthquake resistant construction and governments develop appropriate building codes and enforce them.’

‘If the poor construction seen at the Rana Plaza building can lead to a collapse with no earthquake, that what would be the result of a major earthquake?’ asks Steckler who is a Research Professor of Earth Observatory at Columbia University.

‘We need to do better going forward so more and more of the buildings in Bangladesh are earthquake resistant.  The cost is an extra 10-15% for new buildings’, he said to Daily Sun on Tuesday.

Earlier in January, the Disaster Management and Relief Ministry has identified about 72,000 buildings in Dhaka city which are vulnerable to earthquake. Following a strong earthquake that jolted the capital and other parts of the country, Minister Mofazzal Hossain Chowdhury Maya asked concerned authorities to ensure compliance with building code.

But what do with these risky buildings is yet to be decided.