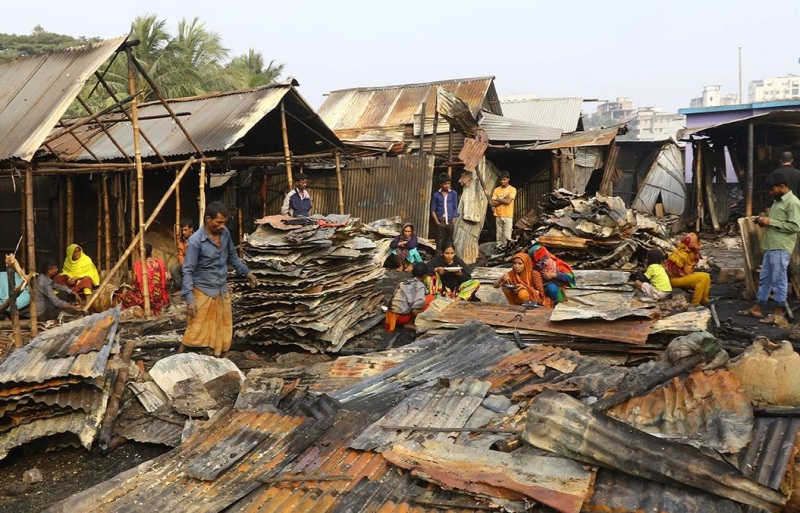 Around six thousand inhabitants of Kalyanpur Pora Bosti who were evicted could not return to their dwelling yet. Some people have repaired their house through patchwork with burned tins where most of the rests are living in hovel. On the other hand, the power connection has been suspended from the day of eviction. As a result, the slum dwellers are still living in dark, heat, nuisance of mosquitoes along with the fear of further eviction.

Housing and Building Research Institute said, the eviction programme will be accomplished after ending of the legal process. While slum dwellers said, before their eviction, it must have to be confirmed the permanent rehabilitation of them.

In spite of the stay order of High Court, government carry out an eviction drive in the slum on January 21 but failed partially in the face of diehard protest by the inhabitants. Being failed a vested quarter set fire on the slum on the following day.

Chairman of Urban Slum Development Organization Md Shah Alam said, among the 3,924 slums of the capital, Kalyanpur Pora Bosti is one of the oldest one. Around 20 thousand people were living in the 10 blocks of Kalyanpur Pora Bosti. Of the total inhabitants, 4,500 have been registered in voters list.  After the eviction and fire, Urban Slum Development Organization conducted a survey in the shanty where they found 12,218 people which mean rest of the people have fled or taken refugee to other slum fearing oppression from the authority and influential.

On the other hand, the slum dwellers have been using electricity through legal meter from 1998. On the date of eviction, the power connection has been disconnected and that not being restored till now.

It has known that, the authority has disconnected the power connections as per the letter of Housing and Research Institute where they asked to cut off the line.

The letter mentioned that, they have halted the eviction work because of the stay order of High Court. It is expecting, the eviction drive will be concluded soon as per the court direction.  They also requested not to reinstate power connection in those illegal establishments which has build on government land.

It has known, in 1989 some clique tried to occupied the slum under the shelter of influential.

On October 13 of that year, a group of people have surrounded the slum and set fire by pouring petrol. In that accident, around 800 houses had burnt to ashes and 9 people along with five children being killed. After the accident people named the slum as Pora Bosti.

Then in 1996, Awmi League government initiates to evict the slum again. But the operation becomes futile because of slum dwellers strong protest. Again in December 24, 2003 and January 17, 2007 authority tried to throw out them again but fall flat because of protest and High Court stay order.

Inhabitant of Pora Bosti, Azhar Ali (60) said, local MP, former ward commissioner, running Mayor and even prime minister Sheikh Hasina have assured us several times to rehabilitate permanently but nobody keeps their words. After the accident of 1989, prime minister Sheikh Hasina announced to rehabilitate us permanently but did nothing for us till now.

Inhabitant of 1 no block Md Eskender (66) said, we who are living in this slum are mostly landless and uprooted people and we have already spend half of our life here. But now Housing and Building Research Institute claimed that it is a state land. It that is true then we are not beyond the state. They have no right to evict us before permanent rehabilitation. We are hearing about human right here and there but where are our human rights?