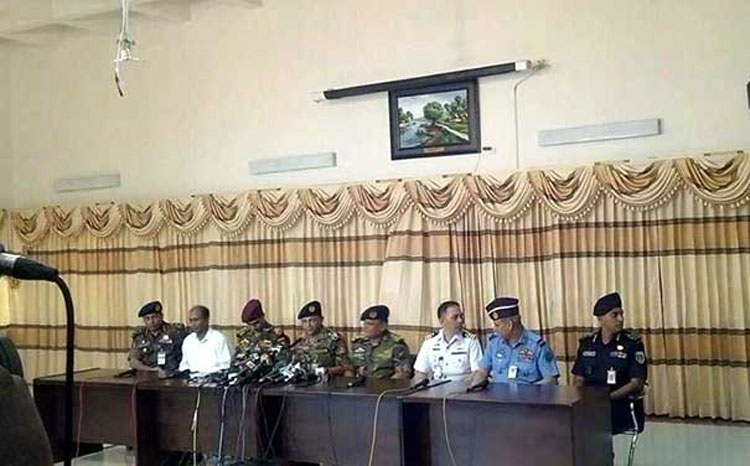 At least 28 people were killed and 12 were rescued from Holey Artisan Bakery in Gulshan where a gunfight broke out between police and gunmen on Friday night and took the inmates hostage, ISPR said in a press briefing at today afternoon.

Gunmen killed 20 people, mostly with sharp weapons, shortly after taking hostage a number of diners at a café in Dhaka’s diplomatic zone last evening, according to Inter-Services Public Relations (ISPR).

The situation has been controlled after 45 minutes of the army-led joint operation.

The joint team began the operation named Thunderbolt about 7:45am with more than half-a-dozen armored vehicles. The operation continued for nearly an hour before some of the rescued people were taken to hospital by waiting ambulance.

The chief of army staff General Abu Belal Muhammad Shafiul Huq and inspector general of police Shahidul Hoque visited the spot in the morning before the commando forces begin their rescue operation.

The identities of deceased could not be known yet.

Ambulance-Rescue Service are staying in the restaurant and some injured are taken to Community Memorial Hospital (CMH).

The developments began around 8:45pm on Friday at the Holey Artisan Bakery and O Kitchen in Road No. 79 near Gulshan-2.

Witnesses said eight to 10 men, one of them armed with a sword and the others carrying 'small firearms with big magazines' raided the place.

The men shouted 'Allahu Akbar' (God is great) on their way in and started firing blanks with around 20 guests still inside - several of them foreigners, according to the restaurant’s supervisor Sumon Reza, who managed to escape.

But media reports suggest the figure was higher.

Police moved in soon, when gun fires were exchanged, and two police officers died of injuries sustained in the shooting.

ISIS claimed responsibility: US-based SITE Intelligence Group said that the Islamic State claimed responsibility for the attack. ‘#ISIS’ ‘Amaq News Agency reported that #ISIS fighters carried out the attack at a restaurant in #Dhaka #Bangladesh,’ SITE said in a Twitter message. In a further update the group also claimed that over 20 people of different nationalities were killed in the incident.