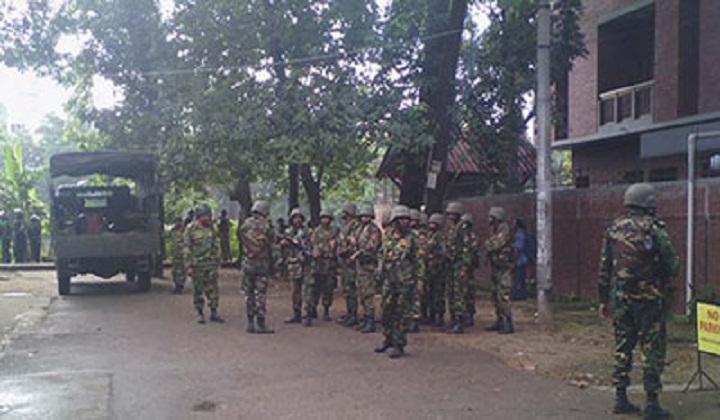 Fifteen people were reportedly rescued as offensive was launched to end the hostage crisis at the country’s diplomatic zone Gulshan in the city.

An armored personnel carrier (APC) reached the spot around 7.20am on Saturday and special teams of different law enforcement agencies took position around Holey Artisan Bakery where a gunfight broke out between police and gunmen on Friday night and took the inmates hostage.

Rescue operation apparently started but there was no official version available immediately to confirm it.

Chief of Army Staff general Abu Belal Muhammad Shafiul Huq reached the spot around 8.10am and Chief of Naval Staff Mohammad Nizamuddin Ahmed at 8.30am.


A foreigner was rescued from the restaurant around 8.20am, said a witness.

Gunshots and heavy sound of explosion started to rock the area at 7:40am.

The journalists had been removed to safe distance from the spot around 5.30am.

Besides, a medical core of Army has prepared several ambulances.

Jasim Uddin, deputy commissioner (sensory division) said operation is still continuing, adding so far 15 people, including some Japanese and Indians, have been rescued.

Earlier, two senior police officials were killed and around 53 people, including several policemen, were injured in an exchange of gunfire at night.

Salauddin’s nephew Mishuk Hasan and Rabiul’s father-in-law Shahjahan Miah told reporters at the gate of United Hospital that the police officers succumbed to injuries they suffered in the gunfight.

At least 50 of the injured, including Additional Deputy Commissioners of Dhaka Metropolitan Police Sheikh M Maruf Hasan and Ahad, were rushed to the United Hospital.

Three other injured -- constables Alamgir, 26, and Pradip, 28, and Abdur Razzak, a microbus driver -- were taken to Dhaka Medical College Hospital.

Witnesses said several gunmen barged into Holey Artisan Bakery, which is popular with foreigners, on Road-79 of Gulshan-2 around 8:45pm.

An assistant commissioner (patrol) of Dhaka Metropolitan Police (DMP) told UNB that the gunshots erupted at the restaurant around 9:15pm after police rushed in on information.

He said the criminals opened fire and threw grenades at the law enforcers from inside the restaurant, leaving many injured, reports unb.