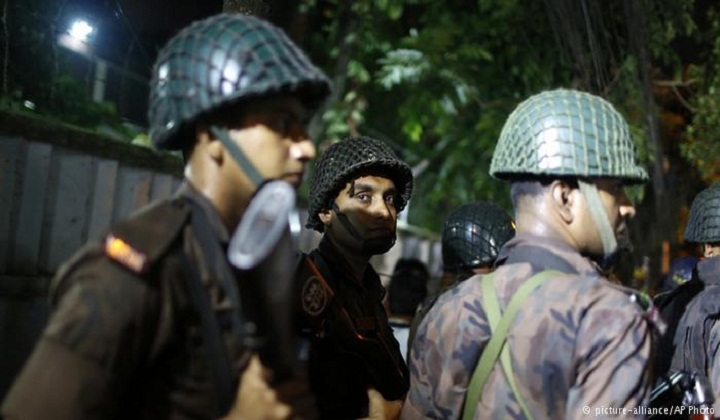 Around 7.30am on Saturday, following a relatively quiet night interrupted only by a small burst of gunfire and sound grenades that accompanied the call to prayer, the army-led joint operation to storm Holey’s Artisan Bakery got underway.

Information at this point is very patchy since the area has been cleared overnight, with even journalists sent further away from the scene of the siege that started last evening, when 8 militants walked into the Gulshan cafe popular with the diplomatic quarter’s foreign residents and started firing and hurling bombs. Middle East death cult IS claimed responsibility within hours.

Efforts to negotiate floundered all night. The army’s planned involvement was kept largely under wraps from the media, but residents did report army trucks moving in during the night, and barely an hour ago things became much clearer, a volley of gunfire ripped through the eerily quiet morning, and for the next 40 minutes, was largely incessant.

Although it has gone much quieter in the last 10 minutes, sporadic gunshots can still be heard piercing the uneasy quiet from time to time.


We are still awaiting confirmation of the operation and indeed its success or failure by official sources, which must obviously account for the safety of some 20-40 hostages, a large number of them foreigners including 7 Italians confirmed by their ambassador in Dhaka to have been inside.

With the gunfire heard all across Gulshan/Baridhara/Banani area, UNB’s Shayan Khan shot this video from his balcony in Baridhara Road 4, just across over the lake from Gulshan Rd 79, where the tragedy unfolded over roughly 12 hours from 8.30 pm on Friday. It gives some idea of the artillery expended in the operation, hearing just one minute of it. Just 40 times more, reports unb.