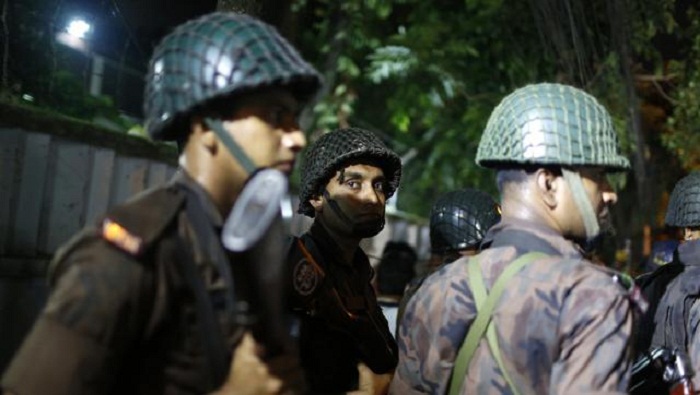 A group of up to nine attackers triggered explosions and took nearly 60 hostages inside a restaurant frequented by both locals and foreigners in a diplomatic zone in Bangladesh’s capital on Friday night, local TV reports said.

The attackers entered the Holey Artisan Bakery in Dhaka’s Gulshan area around 9.20pm and were holding staff and customers, including foreigners, hostage till the time of going to press. The identities of the attackers were not immediately known. A huge contingent of security guards cordoned off the area and the restaurant as they traded gunfire with the attackers who set off explosions.

Three policemen were wounded in the gunfire that erupted, a police officer said. He said there were foreigners inside the restaurant and that police were preparing a plan to enter the premises.

The US state department said there was a hostage situation in the diplomatic enclave of Dhaka.

Speaking from his house in the area, a witness said he could hear gunfire and that the situation “looked quite bad”.

A series of deadly attacks, mostly using machetes rather than guns, have targeted bloggers, atheists and religious minorities in Bangladesh in recent months.

Jamuna Television reported quoting a kitchen staff worker at the restaurant who escaped the attack that the gunmen chanted “Allahu Akbar” (God Is Great) as they launched the attack.

The US state department said it was too early to say who was involved or what the motivation might be, but it confirmed that all Americans working at the US mission there had been accounted for.

“We have accounted for all Americans working for the chief of mission authority in Dhaka,” department spokesman John Kirby told a press briefing. He said the situation was “very fluid, very live”.

Benazir Ahmed, director general of the elite anti-crime force Rapid Action Battalion or RAB, told reporters at 11.20pm (Dhaka time) that security forces were working to save the lives of the people trapped inside.