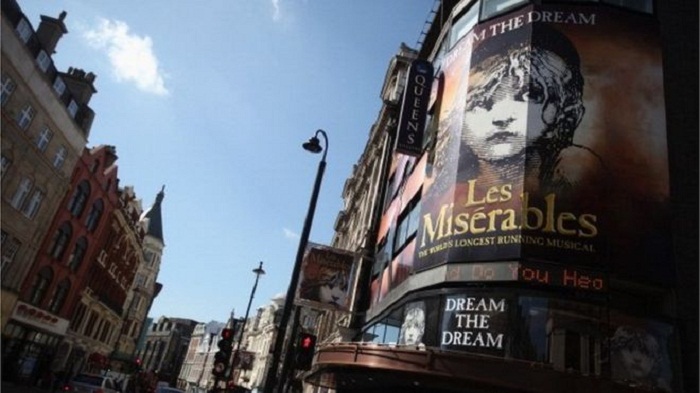 Singapore Authorities said they would take action against the producers of the show, a global hit, for a breach of licensing

A kiss between two male actors in the musical Les Miserables in Singapore has been removed from the show, after complaints from the public.

The scene involved a brief peck on the lips during the song Beggars at the Feast.

After being told it violated its "General" rating, the producers decided to remove the kiss, the Media Development Authority (MDA) said.

The show's organisers said that the scene was intended to be comical.

"The inclusion of the same-sex kiss was not highlighted in the script when it was submitted to MDA for classification. The performance was thus given a 'General' rating," MDA said. "MDA will take action against this breach of licensing conditions."

Since 3 June the scene has been adapted to exclude the kiss, Moses Lye, head of MediaCorp VizPro, the organiser of the musical told local media.

It comes after a row in Singapore over foreign companies sponsoring an annual gay rights rally called Pink Dot which took place on 4 June.

On 8 June, Singapore authorities warned it would take steps to make clear that foreign firms "should not fund, support or influence such events". The rally is sponsored by companies including JPMorgan, Google and Barclays.

Gay rights in Singapore is a fraught issue and recent years have seen courts upholding a law criminalising sex between adult men.

Singapore's vocal Christian community has also expressed its opposition to events such as Pink Dot and support for what it calls traditional family values.