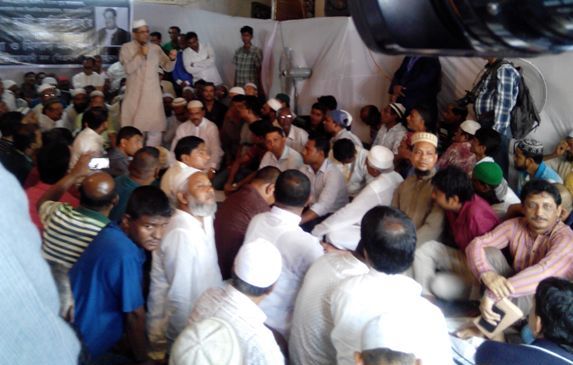 BNP on Thursday alleged that the government is trying to promptly complete the trial of the cases filed against its chairperson Khaleda Zia aiming to eliminate her from politics.

“The trial of the cases filed against our leader Khaleda Zia is going on. Now they (govt) are trying to dispose of the cases as early as possible,” said BNP secretary general Mirza Fakhrul Islam Alamgir.

He further said, “Under the circumstances, we shouldn’t sit idle. We must strengthen our organisation and organise it to foil any plot against our chairperson and keep her in politics.”

Fakhrul came up with the remarks while speaking at a doa and milad mahfil on the ground floor of BNP’s Nayapaltan central office arranged by its Dhaka City unit seeking the salvation of departed soul of ex-Dhaka City Corporation ward commissioner Aziz Ullah.

The trials of Zia Charitable and Zia Orphanage Trust graft cases against Khaleda are now at the final stage while police submitted chargesheets in some other cases filed against her in connection with street violence.

Fakhrul said the government also has begun a process to keep BNP leaders and activists across the country far away from politics by filing thousands of ‘false’ cases against them.

Besides, he said, their many leaders and activists were killed and made disappeared. “Our many student and young leaders have still not returned home since they’re picked up at different times. The country’s situation has reached such a stage that we’ve to face cases, go to jail and endure repression if we raise our voice against it.”

Fakhrul said though their chairperson has repeatedly called upon the government to engage in talks to overcome the current situation, it is not responding to it due to its fear of losing power. “They won’t sit in dialogue as they know they will have to hold a fair and credible election if they reach an understating through it. Because, they will lose their security money if a fair and credible election is held.”

Earlier on Tuesday, a four-member bench of the Appellate Division, headed by Chief Justice SK Sinha, observed that any arrest by members of law enforcement agencies in plainclothes is alarming and directed that law enforcers will have to be in uniform while arresting anyone.

A munajat was offered at the programme, seeking eternal peace of the departed soul of BNP’s Chakbazar thana unit convener Aziz Ullah who died of old-age complications on May 3.