Children and adolescent in electioneering 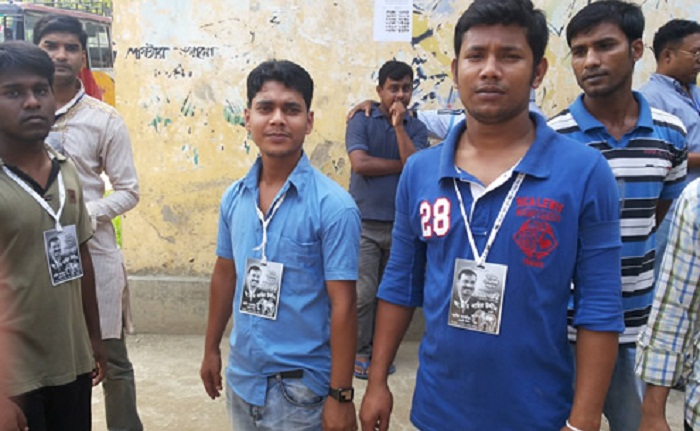 Free, fair and participatory election is one of the main pillars of a democratic country. Candidates from different political-non political, partisan-non partisan background contest in election for peoples mandate to work for their respective community as well as nation. They need to show them off the people and disseminate their ideology/manifesto to the voters to get victory over vying candidates.

In Bangladesh, recent municipality election held in December 30, 2015, for the first time in the history of Bangladesh local government, was in political party basis. In this election, according to the report of election monitoring organizations, Mayor and both of the councilor candidates and their supporters used children and adolescent widely in begging vote, miking, distributing leaflet, and conducted rally during campaigning period from 13-28 December 2015. Besides they used them on Election Day activities such as food supply to the polling agents in and outside of polling stations and voter slip distribution.

An observation report of a prominent election monitoring organization found such an incidents in Savar, Tangail, Jessore, Narail, Magura, Pabna, Ullapara, Badarganj, Hakimpur, Birampur and Muktagasa Municipality which shown mass participation of Children and Adolescent in electoral campaign such as begging vote, miking, distributing leaflet, and conducted rally, voter slip distribution, food and snacks supply for agents and supporters during campaign period and on election day.

Candidates (Mayor and both of the Councilors) of Municipality election-2015 got 15 days for their campaigning. During this time, it was seen significant number of incident of use of children and adolescent in campaigning. In this period, they used Children and Adolescent in begging votes in favor of Candidates (Mayor, General and Reserve councilor), used them in campaigning of candidates i.e. Leaflet/Handbill distribution, Conduct Procession, Loud Miking, Participate in Street Meeting, used them during School Time/Play Time/ Leisure Time in electoral activities, injuries of Children and Adolescent during campaigning period and also used places of Educational Institution/ Violation of Academic Environment of Educational Institutions during electoral campaigning.

Maximum number of candidates used children and Adolescent in begging votes during campaign period. 90 incidents of this type were found in those 11 municipalities though no child was injured during campaigning period.

Voter slip distribution, access in Polling Stations to provide messages and food serving for Polling Agents, begging vote in and outside polling stations and Leaflet distribution were seen adjacent to the polling station on election-day by the children and adolescent.

The report found minimal use of children and adolescent in electoral activities in Tangail (One incident) while it was the highest in other 22 respective candidates in 180 Polling Stations out of 286 of 23 Municipalities. Candidates used children and Adolescent in distributing leaflet and begging votes adjacent to 184 and 133 Polling Stations respectively on election-day.

Children of today are leader of tomorrow. They need political knowledge. No doubt but is it possible to gather political knowledge only from electoral activities of this age? Are the candidates willing to make them prepared for next leadership? Actually children and adolescent are being used by the candidates and leaders. They need proper treatment to be leader through right way not being used by some selfish leaders.

Election Commission Bangladesh (ECB) and local administration should maintain close coordination during election campaign, election-day and post election day. They should arrange long term training for the electoral officials including Returning Officers, Assistant Returning officers, presiding officers and polling officers so that they can keep their eye on electoral campaigning to uphold code of conduct of election.

District Election and Upazila Election offices should arrange candidate consultation meeting on election activities and role of candidate’s behavior not use of children and adolescent in election and keep electoral environment quite.  ECB along with election monitoring organizations and CBO should arrange Civic Voter Education Campaign at National level to let people know about the role and responsibilities of voters and aware of guardians. ECB also could monitor children’s participation in the pre-election campaigning, during election campaigning and Election Day activities. Finally, Candidates should be aware of not to use of children and adolescent in electoral activities.