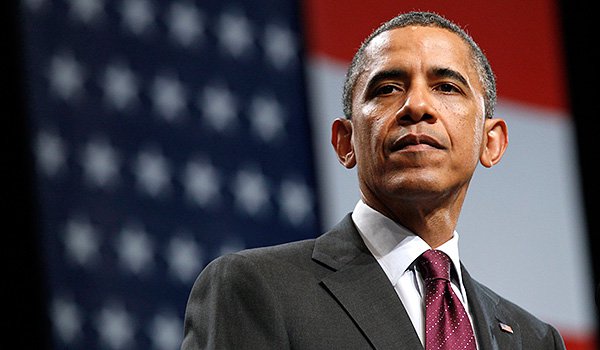 "It would be a mistake for the United States, or Great Britain... to send in ground troops and overthrow the [Bashar al-] Assad regime," he told the BBC.

He also said he did not think so-called Islamic State would be defeated in his last nine months of office.

But he said: "We can slowly shrink the environment in which they operate."

Mr Obama, who has been on a three-day visit to the UK, also warned that Britain could take up to 10 years to negotiate trade deals with the US if it votes to leave the EU in a June referendum.

The US president later arrived in Hannover, Germany, where he hopes to boost support for the controversial Transatlantic Trade and Investment Partnership (TTIP) deal.

Later, he and German Chancellor Angela Merkel are due to open the Hannover Messe, the world's largest industrial technology trade fair.

Mr Obama told the BBC that Syria was a "heart-breaking situation of enormous complexity".

"I don't think there are any simple solutions," he said.

"In order for us to solve the long-term problems in Syria, a military solution alone - and certainly us deploying ground troops - is not going to bring that about."

But he said the international community would have to continue to apply pressure to all parties, including Russia, Iran and moderate opposition groups "to sit down at the table and try to broker a transition".

But he added: "That's difficult."

Mr Obama criticised those countries whose parliaments had not approved actions in Syria but still "want the United States to do something about it".

Mr Obama said Syria was one of many issues that are "transnational in nature... and require a transnational response".

He said: "It would be, I think, tempting, for a lot of people, to believe that we can pull up the drawbridge and that we can carve a moat around ourselves and not have to deal with problems around the world."

But without co-operation and alliances "we are far weaker and we won't solve these problems", he said.

On so-called Islamic State he said: "Prosecuting the campaign is critical, and although I don't anticipate that in the next nine months it will be finished, because, unfortunately, even a small pocket of extremists, if they're prepared to die themselves, can still wreak havoc on many of our cities.

"But I do think that we can slowly shrink the environment in which they operate and take on strongholds like Mosul and Raqqa that are the beating heart of their movement."

At least 250,000 people have died in five years of conflict in Syria and millions have fled the fighting.

Mr Obama and the UN fear a fragile truce between the government forces and non-jihadist rebels, in place since February, is in danger of collapse amid renewed clashes.

Current talks in Geneva between the Syrian government and opposition delegations will continue into next week, but there have been bitter exchanges.

The Syrian opposition delegation, known as the High Negotiations Committee (HNC), and rebel forces inside Syria have accused the government of repeatedly violating the terms of the truce brokered by the US and Russia.

The HNC said the Syrian government was "not a serious partner" while the government hit back by accusing the HNC of "sulking".

Any peace process would require a transitional government, but the role of Mr Assad is a key sticking point.