Bakarkhani: delight in every bite 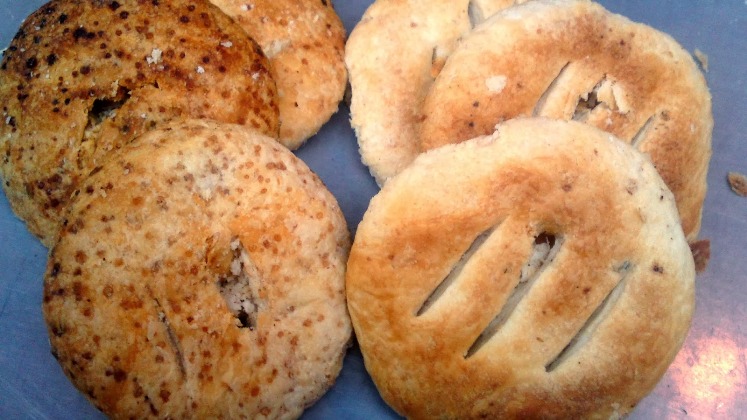 Bakarkhani, which is also called Bakorkhani or Bakharkhoni carrying the tradition of Mughal period for decades. From around the middle of eighteenth century, this legendary item have been existing with it actual test.  According to some legend, Aga Bakar, a general in Chittagong during Nabab Siraj-ud-daulah’s reign madly fell in love with a gorgeous dancer, Khani Begum, who was also the love interest of a rival general. As a result of her two feuding suitors , Khani Begum was eventually murdered and their love ended in tragedy.  Then the distressed lover Bakar is said to have inspired bread-makers to name his favourite bakery item as an to ode to his love. The name thus morphed from “Bakar-Khani” into “Bakarkhani.”

Baked in a large tandoor oven (earthen oven) the Bakarkhani is puff pastry like layered, thin, crisp bread.  Best served during tea time or breakfast, the Bakarkhani melt in the mouth in each bite.

This bread is also popular in Muslim populated areas of Afghanistan and Russia.

Thousands of restaurants are mushroomed in Dhaka city and people thronged there to get the test of foreign foods but they do not have any curiosity to take the test of traditional food like Bakarkhani although it is very simple and cheap compared to those foreign foods.

Bakarkhani is made of oil, flour, water, salt, dalda, ghee and cheese. After making small disk-like pieces those are put inside the tandoor oven for 10 minutes. Then they are pulled out of the oven with a metal stick and rady for sale. During the preparation of legendary Bakarkhani, it is very imperative to repeat the ghee and flour dispersion process twice for each fold.  Otherwise, lack of care will destroy the flavor and layers of Bakarkhani.

A expert Bakarkhani maker can make 6,000 pieces in a day with the help of two novices. Three types of Bakarkhani-- gaojoban, shuki and nimshuki are available in Bangladesh and the demand of Bakarkhani became higher during the two Eids. There are few variations of localized Bakarkhani all over the country. Bakarkhani in Dinajpur, is a doughy, thick bread with morobba pieces where Sylhet or Chittagong is paratha like bread soaked in syrup.   The legendary Old Dhaka Bakarkhani is firm, puff pastry like biscuit.

Bakarkhani is mainly dished up with tea.  But people also like to eat Bakarkhani along with beef, mutton or chicken fry. Someone may become very happy after getting it with sweetmeat. There are many areas in Dhaka where it also served up with kababs.

Most of the narrow lanes of old Dhaka are flanked by Bakarkhani shops. All the shops have big ovens in the middle where couples of people are engaged in making Bakarkhani. They are busy kneading flour, making small balls and then making two straight cuts in the middle of the tiny disk-like pieces.

Lalbagh, Nazimuddin road, Six bazar and Chankharpul areas are famous for Bakarkhani mking. Above from that,  there are some other areas like Jindabajar, Koshaituli, Nazira bazar, Nabab bari, Awlad hossen lane, Narayan lane and Sutrapur are also famed for Bakarkhani. They supply this Bakarkhani to various parts of Bangladesh.