Nepal holds memorials for earthquake victims one year on 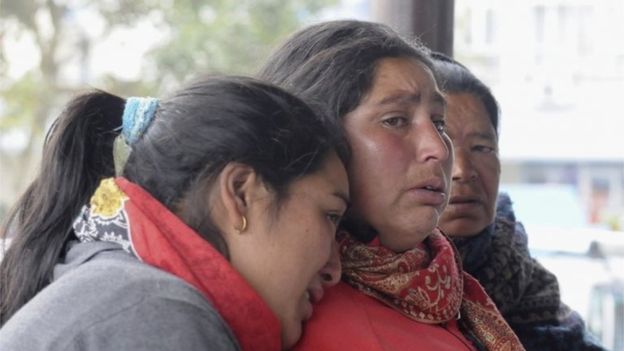 Nepal will hold memorial services today to remember thousands of people killed in a devastating earthquake one year ago, as authorities vow to expedite long-delayed reconstruction projects.

The 7.8-magnitude quake killed almost 9,000 people and some four million survivors are still living in temporary shelter, according to the International Federation of Red Cross and Red Crescent Societies.

More than a hundred monuments were razed to rubble and another 560 structures damaged, including many centuries-old temples and stunning royal palaces in the Kathmandu valley that used to attract visitors from around the world.

In the historic town of Bhaktapur, the traditional brick houses that made it famous have been replaced by grey tents and rusty tin shacks where women like Laxmi Nyapit are now forced to raise their children.

“Unless we get help, I don’t know how we will ever live in a house again,” the mother-of-three told AFP sitting in her tent, which houses a bed and a stove.

“We will spend another monsoon here, we have no choice. If our government cared, we would not be living like this after a year.”

Although international donors pledged $4.1 billion to aid Nepal’s recovery, political wrangling over control of the funds means most victims have received nothing beyond an initial small payout.

The National Reconstruction Authority, tasked with disbursing the money and overseeing rebuilding, was not created until December.

Following a hailstorm of criticism, the government has vowed to kickstart reconstruction of schools and hospitals, and speed up handing out the first $500 instalment of a $2,000 payout promised to homeless survivors.

Kathmandu will also host condolence services and candlelight vigils on Sunday in memory of those who lost their lives.

But memorials are not enough for Nyapit, who has received just $150 from the government.

“I have no expectation from the government now.”

The quake wrecked infrastructure across the hardest-hit regions of Nepal, damaging more than 1,200 health centres and severing a lifeline for remote, rural communities.

Tired of waiting, some 110,000 families have moved back into homes that remain at risk of collapse. More than 31,000 victims have also rebuilt their own houses, taking out loans or turning to charities for help.

On top of the financial losses, pegged at $7 billion, the disaster also delivered a severe blow to Nepal’s already weak economy.

Growth is now expected to reach just 1.5 per cent over the financial year ending in July 2016 — the lowest level since 2007 — according to the Asian Development Bank (ADB).