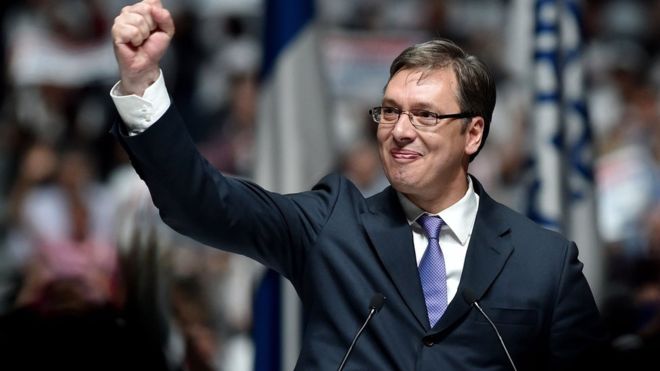 Polls have opened in Serbia in a parliamentary election seen as a de facto referendum on whether the country should seek EU membership.

Prime Minister Aleksandar Vucic called the vote two years early seeking a clear mandate to continue with reforms before the country could join the EU.

Polls have suggested a win for his Progressive Party.

But discontent with Mr Vucic’s pro-EU stance looks set to bring ultra-nationalists back into parliament.

They oppose membership to the European bloc and favour closer ties with Russia.

These include Radical Party leader Vojislav Seselj, whose popularity has been boosted by his recent acquittal of crimes against humanity at the UN war crimes tribunal in The Hague.

This is Serbia’s third parliamentary election in less than four years. Some 6.7 million people are eligible to vote.

Voting continues until 18:00 GMT and partial results are likely to come a few hours after that. There are no exit polls.

Opinion polls have indicated an absolute majority for Mr Vucic in parliament.

“We want to complete the process of privatisation, speed up (private) investments and above all to spur the entrepreneurial spirit of the people,” Mr Vucic told Reuters news agency.

The ultra-nationalists, however, could complicate Serbia’s EU membership talks by resisting concessions, such as ending the claim to sovereignty over Kosovo.

Critics of Mr Vucic say his government has become increasingly autocratic, with some calling him a “dictator”.

Serbia has signed a €1.2bn ($1.35bn; £940m) loan with the International Monetary Fund. In return, it needs to implement austerity measures demanded by the group.

The country’s economy is in bad shape and unemployment is at around 18%.