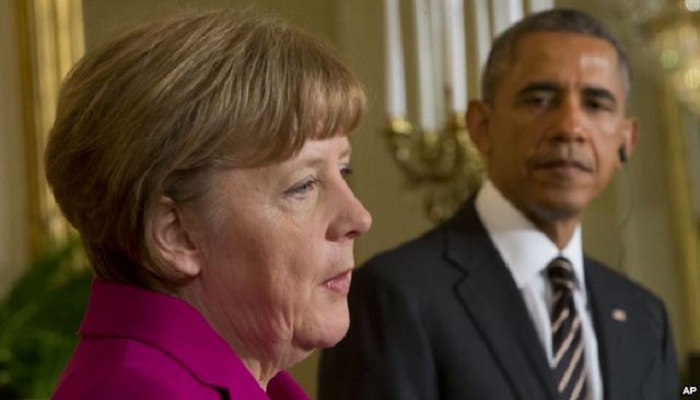 President Barack Obama and German Chancellor Angela Merkel participate in a joint news conference at the White House in Washington, Feb. 9, 2015. The two will confer on a variety of issues during Obama's two-day visit to Germany.

HANOVER, GERMANY—U.S. President Barack Obama and German Chancellor Angela Merkel will discuss the global economy, terrorism, transatlantic security and many other issues during his two-day visit to Germany.

Obama will hold talks with Merkel shortly after he arrives in Hanover on Sunday.

After addressing reporters, the two leaders will officially open the Hanover Messe, billed as the world’s leading trade fair for industrial technology. Organizers expect 6,500 exhibitors and more than 200,000 visitors from 70 countries.

White House officials say the event shows the importance of U.S.-German collaboration on many issues, including trade and commerce.

The two hope to build support for the Transatlantic Trade and Investment Partnership, or TTIP. The free-trade pact is being negotiated by the U.S. and the European Union.

The president felt it was important to visit Germany during his final year in office because Merkel has been “a close partner for his entire time in office,” said deputy national security adviser Ben Rhodes.

The agenda includes the coalition fight against Islamic State and counterterrorism cooperation, following attacks in Brussels and Paris in recent months.

“We will be discussing both how to increase cooperation across the Atlantic and what Europeans themselves can do to better integrate their various agencies within countries and across borders,” said Charles Kupchan, White House senior director for European affairs.

The talks will also touch on the status of a cease-fire in Syria and the implementation of the Minsk agreement reached by Ukraine and pro-Russian separatists.

Obama is also expected to express support for a deal between the European Union and Turkey to manage the flow of migrants and refugees from Syria and other unstable, chaotic or violent states.

The leaders and their counterparts from Britain, France and Italy will hold talks ahead of a NATO summit set for July in Warsaw.

“The president will be discussing the agenda in preparation for that summit and the importance of NATO addressing its challenges, both on the eastern and on the southern flanks,” Kupchan said.

Obama will cap his visit Monday with a speech outlining his vision for future U.S.-European relations.