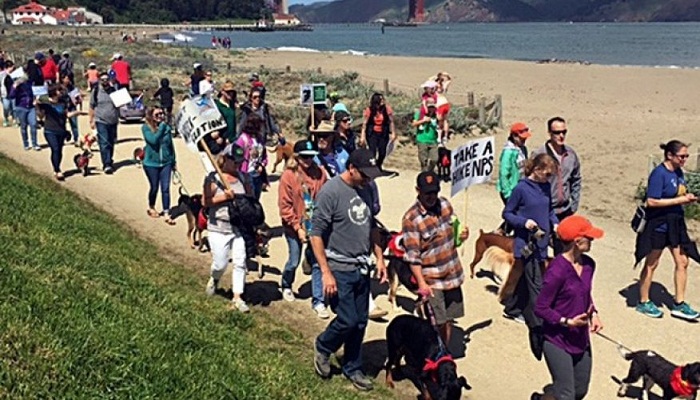 The protesters on Saturday walked their four-legged pooches, many wearing red bandanas, along Crissy Field while holding signs that read "Unleash Our Land!" and "Put Feds On A Leash!"

Andrea Buffa, an event organizer and member of Save Our Recreation, said protesters are calling on the National Park Service to keep dog walking in the open-space areas where it has been allowed for decades, including Ft. Funston and Ocean Beach in San Francisco, Muir Beach in Marin County and Rancho Corral de Tierra on the Peninsula.

"We are undaunted and more determined than ever after years of seeking a balanced plan. If the Park Service thinks we're going to just roll over and play dead, they have another thing coming," Buffa said.

In February, the National Park Service released its near-final dog rule, which limits walking dogs off-leash in the recreation by up to 90 percent and on-leash dog walking by up to 45 percent.

Park officials say their plan is needed to balance the needs of different park users.

But participants in the so-called Mighty Mutt March disagree.

Laura Pandapas lives near Muir Beach in Marin, where she walks her standard poodle, Shugie. The new rules would force her to either use a 6-foot leash or drive her dog to a beach farther away and with rougher surf.

The march was a much-needed opportunity for the people to come together to oppose the new plan, Pandapas said. "We've all felt pretty isolated trying to fight this in our individual houses," she told the San Francisco Chronicle.