IS A BEE AS SMART AS A SAT NAV? 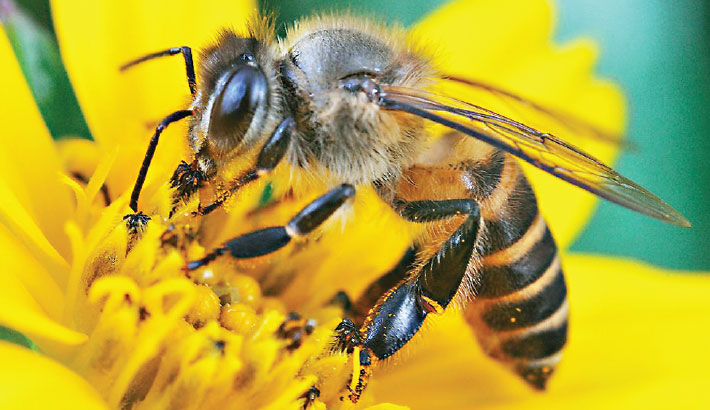 We are all familiar with the satellite navigation systems found in modern cars and smartphones. It’s modern technology that we program in a location and get given directions and distances until we reach our final destination. Yet the humble foraging honey bee does all this many times every single day in its daily quest to find the perfect flower to tap for nectar and pollen.

But if that wasn’t miraculous enough, a bee can pass on the exact location of the perfect flower to its colleagues, so they can share in the bounty. Its secret is not using circuit boards and processors, it’s the angle of the sun, counting landmarks and electrical fields. So suggesting that a bee could be as smart as your modern satellite navigation system is not as daft as it may seem.

It is well known that bees have exceptional navigational skills as they can find the same nectar and pollen rich flowers time and time again. Below are some of the incredible techniques they use.

We might naively think that bees make honey for us to spread on our toast in the morning or soothe a sore throat; this is of course not the case. While it’s true we do enjoy the benefits of bees’ honey, they make it for an altogether more important reason: to feed the colony over winter.

They make it from all the sweet sticky nectar collected from flowers after long and complicated foraging trips. This nectar is then mixed with enzymes from glands in the mouth and stored in hexagonal wax honeycombs. Once the water content has reached around 17%, the cell is sealed with wax until the bees need it.

A strong hive in a good season could produce two to three times what they actually need; it is this surplus that gets collected, so the bees don’t actually miss it at all! The type of honey made depends on the species of flower the nectar was collected from: oil seed rape makes a very hard honey, whereas garden flowers make a more runny honey.

For an insect that is only 15mm long the honey bee can travel a remarkable distance every day. They can fly more than 10 miles to find food. For a colony of bees that means flying vast distances, just to produce this jar of honey means flying 55,000 miles, that’s twice around the world.

They are no slouches either with speeds in excess of 15mph possible. Finding that perfect source of nectar can be a challenge for a bee and finding its way back to the same flower even more so. But that’s exactly what the honey bee does.

Amazingly bees don’t act on their own, they are able to communicate to each other where the flowers are. They have evolved a series of movements known as the waggle dance; we can decode this dance language and see that it communicates to other bees the angle to fly with respect to the sun and the distance from the hive.

If that wasn’t clever enough, recent research has uncovered that we can’t see electricity. The charge built up when a bee returns to the hive allows her to move the body parts of other bees and that might communicate even more than the waggle dance alone.

Even more amazing is that honey bees can detect the electric fields around flowers. The electro-magnetic charge around a flower lets bees know if it’s been recently visited, so bees don’t waste their time visiting flowers without nectar.

The amount we now know about honey bees is nearly as incredible as the honey bees themselves. And that’s not least because of some of the technology we use such as radar tracking.