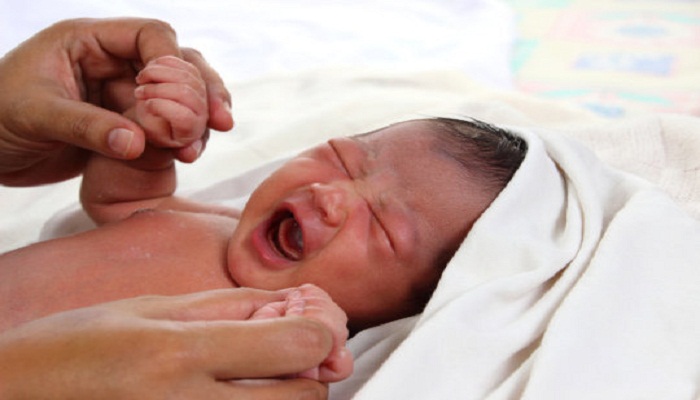 Gender stereotyping may start as young as three months, according to a study of babies' cries from the University of Sussex.

Adults attribute degrees of femininity and masculinity to babies based on the pitch of their cries, as shown by a new study by researchers from the University of Sussex, the University of Lyon/Saint-Etienne and Hunter College City University of New York. The research is published in the journal BMC Psychology, reports SD.

When told the gender of the baby, adults make assumptions about the degree of masculinity or femininity of the baby, based on the pitch of the cry

Men who are told that a baby is a boy tend to perceive greater discomfort in the cry of the baby. This is likely to be due to an ingrained stereotype that boy babies should have low-pitched cries. (There was no equivalent finding for women, or for men's perception of baby girls.)

Despite no actual difference in pitch between the voices of girls and boys before puberty, the study found that adults make gender assumptions about babies based on their cries.

Dr David Reby from the Psychology School at the University of Sussex said: "It is intriguing that gender stereotyping can start as young as three months, with adults attributing degrees of femininity and masculinity to babies solely based on the pitch of their cries. Adults who are told, or already know, that a baby with a high-pitched cry is a boy said they thought he was less masculine than average. And baby girls with low-pitched voices are perceived as less feminine. There is already widespread evidence that gender stereotypes influence parental behaviour but this is the first time we have seen it occur in relation to babies' cries. We now plan to investigate if such stereotypical attributions affect the way babies are treated, and whether parents inadvertently choose different clothes, toys and activities based on the pitch of their babies' cries.

"The finding that men assume that boy babies are in more discomfort than girl babies with the same pitched cry may indicate that this sort of gender stereotyping is more ingrained in men. It may even have direct implications for babies' immediate welfare: if a baby girl is in intense discomfort and her cry is high-pitched, her needs might be more easily overlooked when compared with a boy crying at the same pitch. While such effects are obviously hypothetical, parents and care-givers should be made aware of how these biases can affect how they assess the level of discomfort based on the pitch of the cry alone."

Prof. Nicolas Mathevon, from the University of Lyon/Saint-Etienne & Hunter College CUNY, commented: "This research shows that we tend to wrongly attribute what we know about adults -- that men have lower pitched voices than women -- to babies, when in fact the pitch of children's voices does not differ between sexes until puberty. The potential implications for parent-child interactions and for the development of children's gender identity are fascinating and we intend to look into this further."

The researchers recorded the spontaneous cries of 15 boys and 13 girls who were on average four months old. The team also synthetically altered the pitch of the cries while leaving all other features of the cries unchanged to ensure they could isolate the impact of the pitch alone. The participating adults were a mixture of parents and non-parents.