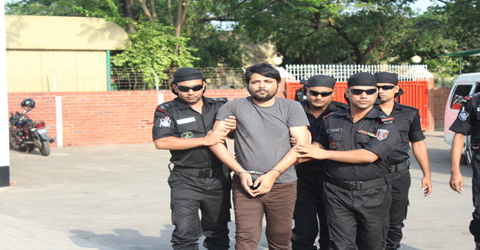 Members of Rapid Action Battalion (Rab) have arrested a junior executive of Kohinoor Chemical Company Ltd from the city’s Tejgaon area after he allegedly went into hiding misappropriating around Tk 31 lakh of the company.

Sources at the Rab-2 headquarters said Advocate Palash Kumar Roy had been working as a junior executive for the company since November 25, 2013.

He remained missing since February 16 last after he drew Tk 35 lakh from the company’s bank account for paying dues to various organisations and individuals. He also kept important documents with him.

Kohinoor Chemical filed a case in this regard.

Meanwhile, Palash’s mother Mina Rani Roy registered a general diary with Ramna Police Station on March 30 stating that her son had been a victim of forced disappearance. She also submitted a petition with the Chief Judicial Magistrate Court on April 4.

Even Mina Rani held a press conference at Dhaka Reporters Unity on April 5 in this regard.

Briefing reporters at the Rab-2 headquarters on Friday, its commanding officer Lt Col Md Mohiuddin Ahmed said the elite force launched an investigation to unearth the mystery behind the matter and finally arrested Advocate Palash from Monipuripara on Thursday night.

He also said Palash used to contact her mother regularly over phone during the time of his said forced disappearance.

The arrestee will be handed over to the police station concerned in connection with the case, Mohiuddin said.