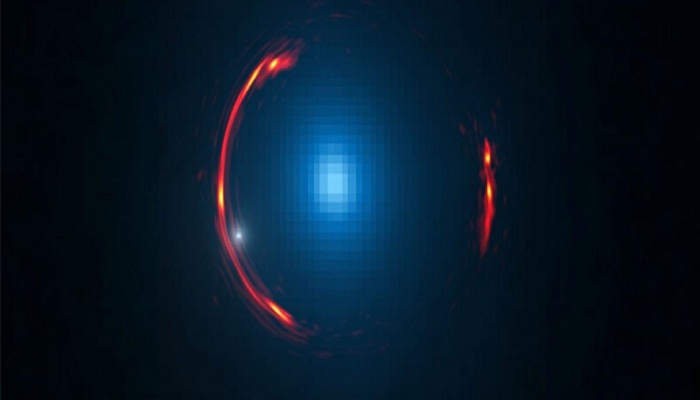 This really is a galaxy far, far away.

A hidden dwarf dark galaxy was discovered four billion light years away from Earth by astrophysicists at Stanford.

The dwarf galaxy appears as a "tiny halo companion of a much larger galaxy," according to researchers. A new paper about the discovery will be published in the Astrophysical Journal.

New Horizons: 5 Discoveries the Space Probe Made on Its Journey to Pluto

Using a phenomenon called gravitational lensing, researchers were able to learn about the dark dwarf galaxy by imaging the light from a neighboring galaxy.

"We can find these invisible objects in the same way that you can see rain droplets on a window: You know they are there because they distort the image of the background objects," Yashar Hezaveh, an astrophysicist at Stanford said in a statement. "In the case of a raindrop, the image distortions are caused by refraction, but here similar distortions are generated by the gravitational influence of dark matter, according to Einstein's theory of relativity."

After capturing an image through gravitational lensing, researchers then used thousands of computers, including the supercomputer Blue Waters at the National Science Foundation, to determine the existence of the hidden dwarf galaxy.

The process could help researchers learn about other hidden parts of the universe. Most galaxies are believed to have similar dwarf galaxies, however detecting them has been a challenge until now, according to researchers. Of the estimated thousands of dwarf galaxies lurking near a companion galaxy, only 40 or so have been identified, according to the team at Stanford.