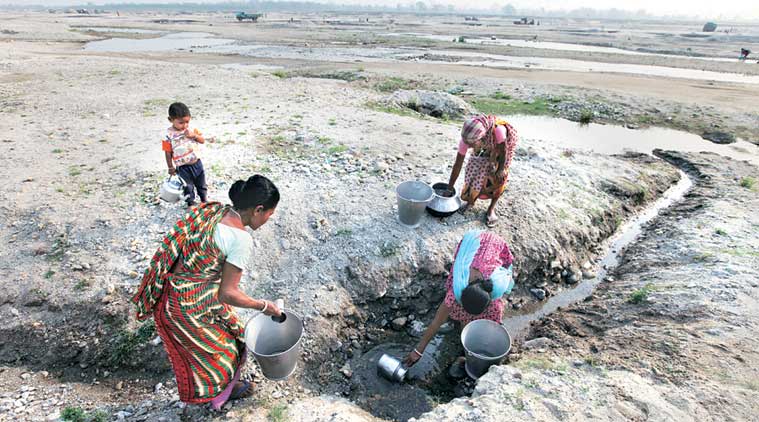 Seventy wells in a village, 65 of them dry. For the last four months, residents of Tarabari village in Matigara-Naxalbari constituency in Darjeeling district have seen all wells in their village dry up one by one. The 70 wells are government-made, set up because of an acute water shortage. Political leaders have given them only “empty assurances”, say the villagers who now depend on the Balason river.

It is after Naxalbari that the name “Naxal” was coined.

Every day, Phuleshwari Roy, 55, makes five to six trips down the path to the river. “We need at least seven buckets of water a day. We have five members in the family. My daughter-in-law is expecting a baby, which is why I have to do this hard work,” said Phuleshwari, who sells baskets of pebbles and sands from the riverbed to contractors and earns Rs 150 a day.

“Every morning I have to rush to the river for a bath, to wash my clothes and collect water for cooking. After that I have to make three to four more trips,”said Sushma Singa, 31.

Every monsoon, when dirty water from the river seep into their wells, residents of Tarabari village have to depend on outside source for water. “We buy water then or get it from other villages, but this rapid drying of wells is new,” said Joydeep Roy, 35, a carpenter.

Most of the 4,000 odd residents of the Tarabari village belong to the backward Rajbansi community and depend on the river. “The villagers here are mostly daily labour hands who carry pebbles and stones from the river for contractors,” said Shefali Singha, gram panchayat member.

Asit Nandi, gram pradhan of Atharokahi panchayat of which Tarabari is a part, said that his party, CPM, has done everything they could for the village. “We have repaired all the 50 government wells. With whatever little funds we had, we did our work. The sitting MLA (Congress) also should have taken some interest,” says Nandi.

Shefali Singha contradicts the claim. “They did repair a few wells, about 10 or 15 of them, but they dried up again a few weeks later,” she said.

The sitting MLA, Sankar Malakar, said, “Funds were allotted for this, but the groundwork has to be done by the panchayat.”

Matigara-Naxalbari constituency is reserved for Scheduled Castes. The Congress was in alliance with TMC when Malakar won in 2011; it has partnered the Left now.

“We are confident that we will win this seat again, we have done enough good work,” said Malakar, whose challengers are Trinamool’s Amar Sinha and BJP’s Anand Mai Varman.

In the 2015 panchayat polls, the Left swung six of the nine seats of the Siliguri Mahakma Parishad, while the remaining three seats were won by the Trinamool Congress.