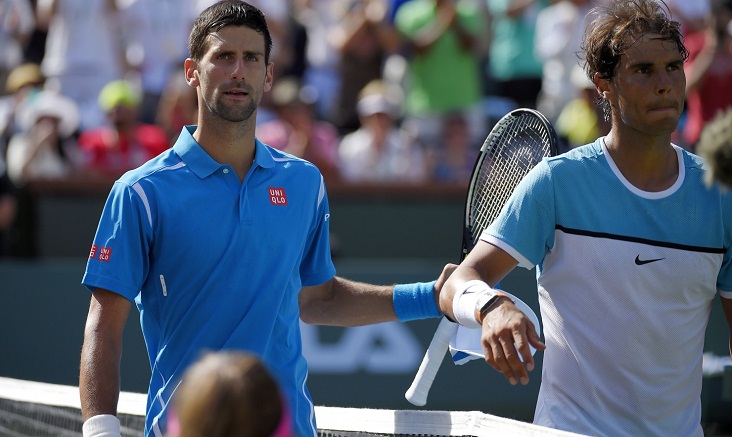 The world's top-ranked player will meet Milos Raonic in Sunday's final, with Djokovic trying to win a record fifth title in the California desert. He has won the last two years.

Djokovic extended his advantage over Nadal on hard courts to 18-7, winning the last seven times since the Spaniard beat him in the 2013 U.S. Open final. The Serb also owns a 25-23 edge in the longest running rivalry in the Open era, having won six straight meetings and 10 of the last 11.

"I managed to stay composed and serve well in important moments and just believed that I can win," Djokovic said.

Nadal, a three-time winner here, came up short in making his 100th career singles final with his second loss to Djokovic this year. The Serb won in the final at Doha in January. Nadal hasn't won a title on hard courts since 2014 in Doha.

"Today was closer than the last couple of times against the best player of world, so was a very positive week for me," Nadal said. "If I am able to play weeks in a row at this level, then you start to think about the chances to compete for everything."

Djokovic and Nadal traded service breaks in the first before Djokovic held to force the tiebreaker.

"I just served well and hung in there," Djokovic said. "I made him play an extra shot."

Helped by three straight errors from Nadal, Djokovic built a 5-2 lead. Nadal recovered to win three straight points, two on errors by Djokovic. But the momentum quickly swung back to Djokovic, who closed out the set on Nadal's service return error and his netted backhand.

"I felt for a moment that I was competing at the highest level possible," said Nadal, clearly the crowd favorite in the packed stadium. "At the beginning of the tiebreak and at the end of the first set, I made a few mistakes with my forehand. That's the only thing."

Nadal survived a four-deuce game to tie the second set 1-all and faced three deuces on his serve to hold at 2-all. Djokovic earned the only break in the sixth game to go up 4-2 and then served a love game for a 5-2 lead.

Nadal made one last stand on his serve, fighting back from a triple match point with a big forehand in the corner to get to deuce. But his forehand let him down on two subsequent deuce points and Djokovic closed it out on his sixth match point.

Last year, Raonic saved three match points to beat Nadal in the semis before losing to Roger Federer in the final.

"If Milos serve well, he can win against everybody," Nadal said.

Raonic defeated Roger Federer to win his first title of the year at Brisbane and reached the semis at the Australian Open before an injury he sustained Down Under forced him out of two tournaments and Davis Cup.

"Milos is probably playing the best tennis that he has ever played," Djokovic said. "His serve was phenomenal before the start of this season, but it seems like he has improved even more, especially the second serve. He's going for it more. He's not giving you the same look."

Raonic simply overwhelmed his smaller opponent, connecting on 63 percent of his first serves in the two-hour match. The 6-foot-5, 215-pound Canadian averaged 131 mph on his first serve and even his second serve was 2 mph faster than Goffin's first serve of 110. Raonic has yet to drop a set in four matches.

"Definitely have been playing higher level this year, but I think also when I have had those difficult moments or let's say some kind of crisis throughout matches, I have found solutions better," Raonic said. "Maturity is a big part of it."

"I have obviously a big challenge ahead of me, but I have been pretty good this year at finding solutions," he said.

In the women's doubles final, Bethanie Mattek-Sands and CoCo Vandeweghe defeated Julia Goerges and Karolina Pliskova, 4-6, 6-4, 10-6. It was the first major pro title for Vandeweghe, the 24-year-old niece of former NBA player and current league executive Kiki VanDeWeghe. She and Mattek-Sands earned $336,920.