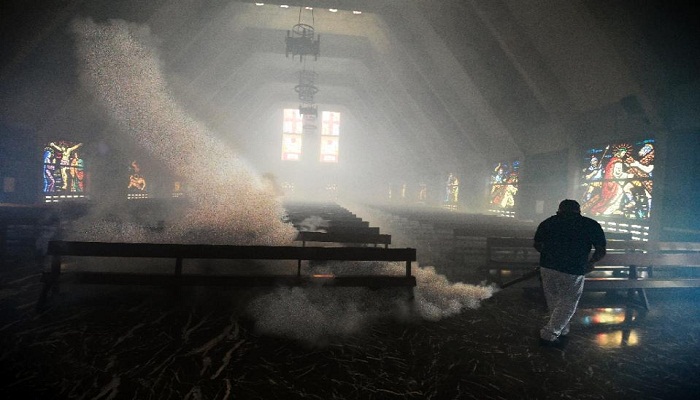 A Health Ministry employee fumigates against the Aedes Aegypti mosquito inside a church in Caracas on February 5, 2016 (AFP Photo)

Three people have died in Venezuela from complications linked to Zika, President Nicolas Maduro said -- the first fatalities reported in the country in connection with the mosquito-borne virus.

Speaking on national television, Maduro said there were 319 confirmed cases of the virus in the South American country, adding: "Unfortunately we have had three deaths from Zika nationwide."

Maduro said 68 patients with complications "have been in intensive care," adding that the country had the necessary drugs to treat them.

Without providing any details, he said that 5,221 suspected cases of Zika had been reported from November 5 until February 8.

Maduro thanked the governments and embassies of India, Cuba, China, Iran and Brazil for their support in providing medication and "much more."

Maduro's comments came as other South American countries are boosting efforts to contain the virus, which is thought to cause brain damage in babies.

The vast majority of Zika cases are mild but it has been linked to a rapid rise in the number of children born with microcephaly -- abnormally small heads and brains -- to mothers infected during pregnancy.

Brazil has been most affected by the outbreak, with 1.5 million people infected since early 2015.

The World Health Organization has declared the rise in Zika-linked birth defects an international emergency.

On Thursday, Peru confirmed Zika in a patient who had been on vacation in Venezuela. A Venezuelan living in Lima has also been diagnosed with the virus.

Officials in China, meanwhile, have said a man was diagnosed with the virus after he returned from Venezuela and reported a fever, headache and dizziness.

It was the first such toll from the government in the South American country of 30 million, which is struggling with an economic and political crisis.

She added that Venezuela had also recorded 255 cases of Guillain-Barre syndrome, a neurological disorder that can cause paralysis or even death.

Doctors have warned that acute shortages of medicine and poor access to water due to a drought and limited infrastructure -- which has led locals to stockpile water, thereby creating breeding grounds for mosquitoes -- threaten to exacerbate the outbreak of the virus.

The president of the country's pharmaceutical federation, Freddy Ceballos, told AFP that the drugs shortage amounts to 80 percent -- calling it "very worrying."

The lack of medicine prompted the opposition to demand that Maduro declare a humanitarian health crisis.

In an attempt to keep Zika from spreading, brigades of workers donning protective masks and goggles have fanned out across several regions in recent days, spraying houses, yards and gardens to kill mosquitoes as part of a government plan.