I will stick to my decision until death: Ershad 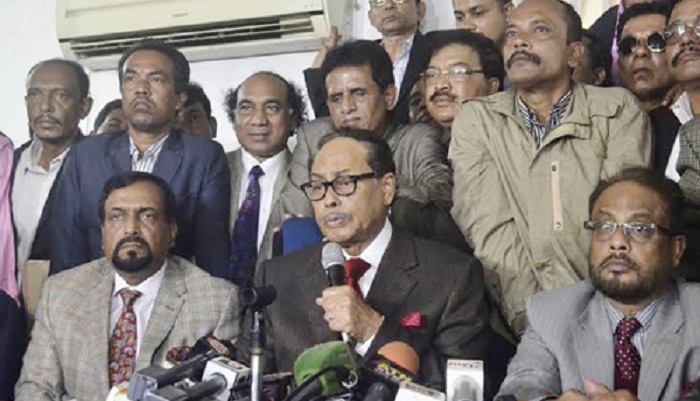 Jatiya Party Chairman HM Ershad on Tuesday said he will stick to his decision on appointing GM Quader and ABM Ruhul Amin Hawlader co-chairman and secretary general of the party respectively until his death.

Earlier, JP Chairman announced the removal of Ziauddin Ahmed Bablu as the party secretary general and replaced him with Ruhul Amin Howlader at an emergency press conference.

Ershad said he relived Bablu of the party secretary general for breaking organisational discipline and also in the party interest.

He alleged that Bablu has violated his decision about making his brother GM Quader as party co-chairman and Howlader as member secretary of its national council preparatory committee, and created a division in the party. “From now on, Howlader will act as the party secretary general.”

On the other hand Parliamentary Party of Jatiya Party (JPPP) opposed Ershad’s decision of introducing a new post of party co-chairman and changing the party secretary general.

The hour-long JPPP meeting that began around 3:30pm was held at the opposition leader’s office in parliament. All the 40 Jatiya Party MPs, including Ershad and Ruhul Amin Howlader, joined the meeting.

Talking to reporters after a JPPP meeting, opposition chief whip Tajul Islam told reporters that the party MPs gave their different opinions about the decisions that were made by their chairman regarding the party over a few days.

He said the meeting requested the party chairman to finalise the decisions after elaborate discussions on those at the party presidium and JPPP meetings.

In response, Tajul said Ershad told the meeting that he will take step in this regard after discussion with his wife and Leader of the Opposition in Parliament Raushon Ershad.

Anisul Islam Mahmud who was standing beside Tajul claimed that the meeting turned down Ershad’s decisions.

After the meeting, Tajul said Raushon was not willing to talk to media and assigned him to brief about the outcome of the parley.

Emerging from parliament after attending the meeting, Ershad said he is firm on his decision. “I’ll stick to it until my death.”

Ershad who was on a five-day tour of Rangpur returned to Dhaka at noon for the news conference amid the deepening crisis in the party.

Ershad on Sunday announced his younger brother GM Quader as the party co-chairman at a press conference at its Rangpur office.